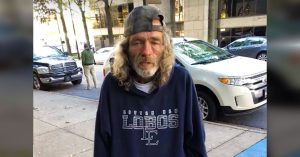 Even with all the technology we have at our fingertips, it’s not unheard of to fall through the cracks. Names and addresses change over time, as do phone numbers. Families get bigger, sometimes smaller and it’s difficult to keep the lines of communication open when the stresses of life are an everyday reality. Some people run away, and others try to forget.

When wife and husband, Dawn and Jodi Gieber from Little Rock, Arkansas, came face to face with the chance to get someone’s life back on track, they took it, knowing that not everyone has the means to tie up loose ends and figure out how they got so far from where they first started.

James doesn’t have a home. He’s been roughing it out on the streets of downtown Little Rock for 15 years. Dawn is a records specialist and works at the courthouse where James spent his days killing time. Jodi, an officer, would also see him when he was on patrol. “People would say James was very angry. James was a mean person. He wasn’t. James was just hungry,” says Dawn. “He was cold. He was eating out of dumpsters. James just had no resources and my husband and I just felt that there was something we needed to do to help him.”

It wasn’t until one day Dawn asked him a simple question that completely redirected the course of his life. She asked, “Why are you homeless?” This was the beginning of James’ very human story. He explained that he had lost his family years back. Astounded by his confession, Dawn and Jodi got to work, digging up names and places, making calls and Googling things. After a bit of detective work, it was just before Thanksgiving when their efforts paid off. James’ family had been looking for him as well but assumed he was dead he had been gone for so long.

The couple got James on the phone to talk to his family as they pulled a few strings and embarked on a road trip some 600 miles to Illinois for quite the reunion. “Seeing James reunite with his family was so rewarding,” says Dawn. “It was just the right thing to do – he’s a person and that matters.”

Now, James is getting back on his feet, off the streets and living with his brother. Click below to watch more.