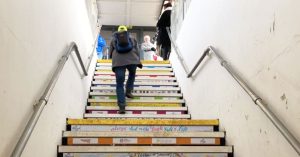 Everyone has a bad day. Sometimes you go to bed thinking about something not so pleasant, and that energy translates into a bad mood the next morning. You’re then forced to start your day off on a rather low-key note, trying to shake it off as you get ready for work, make your coffee, and head over to the railway station to start your morning commute.

Commutes aren’t always too much fun either. You’re usually stuck sitting, and sometimes even standing, in a train full of a ton of other people, all rushing to get to their destination in good time. Now take those crowded train carts and mix them in with a bad start to the day, and all of a sudden, things are just that much more blah!

But, what if you had a positive moment somewhere in between all that? What if, while you were running up the steps to catch the train, you saw something that genuinely made you smile and reevaluate the rest of your day? Anyone can use that kind of spontaneous positivity every now and then, right? Right!

Well, if you’re a commuter that goes through Dudley Port Station at the Black Country railway station, in England, then you’re in for optimism every morning, afternoon, and night—pretty much any time you travel through the station.

Dudley Port Station collaborated with The Kaleidoscope Plus Group, a charity that promotes health and well-being, to add 12 positive and uplifting signs to the station. This effort is to help those who are experiencing emotional distress or going through any sort of trauma; this notion helps put a smile on the reader’s face, even if it is temporary. These signs give people a nudge of encouragement and something to look forward to while they’re on their commute.

The Kaleidoscope Plus Group ran a competition allowing everyone and anyone to submit slogans that could potentially win a spot on the Dudley Port platform. They reported that the company received over 300 slogans to choose from, all in efforts to brighten someone’s day while they’re headed to work, school, to run errands, or anywhere else their duty calls.

These signs are strategically placed on steps leading up to the platform so people can read them as they make their way to the trains. The staff at the charity group believe that a simple motivational quote can go a really long way for someone, and we agree! It’s a step in the right direction to spread positivity and a little bit of happiness in anyone’s day.

For more information on the initiative, and to catch a glimpse of what these signs look like, click on the video below!