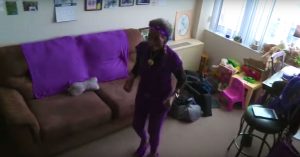 Exercising, eating well…they can be pretty daunting tasks if you’re not feeling up to it. It’s easy to want to cave and order a pizza after a long day. It’s more convenient to drive in the store instead of breaking into a sweat in the summer or having to bundle up in the winter. We all know we should be eating more veggies and getting more steps in but if you don’t have a gym, it’s kind of hard, isn’t it? Apparently not.

It doesn’t even matter what age you are either–because at 86, Jessica Slaughter, a grandma from St. Louis is proving to the rest of us, that yes you can, in fact, keep active at her age while living in a small apartment–without a gym.

Growing up in Mississippi, Jessica says she was always the heavier one in her class. Even at such a young age, she was teased a lot. “I didn’t know how to stop eating. Fried chicken. Bacon and eggs. Desserts, like cake and pies.” She always chose food.

It was when she approached her seventies that the senior made a big, impactful change on her life. When she went to the doctor for a check-up, she was told that she was borderline diabetic. Addicted to alcohol and food, and at a size 22 that was gradually getting tighter and tighter every day, she knew she had to do something different. Jessica knew she wanted to improve her quality of life, not wanting to spend her retirement years struggling to move.

So, she made a conscious decision to get healthy. She incorporated plenty more fruits and vegetables into her diet, but things really took off when she started walking. “I just made the decision. I’m just going to walk the same amount of time every day.” And she’s been putting in 3,000 steps daily in her small one bedroom apartment. Her granddaughter even bought her a Fitbit to help her keep track of her progress because it’s the results that keep her motivated. Jessica’s morning walk is from the living to the kitchen, back and forth. Simple, but effective.

Her message to fellow seniors? “You don’t have to go fast to get into shape, you just have to go. I just wanted seniors to know just because we get to a certain age, we don’t have to stop living. I want to tell them there’s a better way to live if they choose.” Jessica’s inspiring story started in her 70s, and she’s still going strong.

Click on the video below, watch her workout and listen to her inspiring words of wisdom.