Haven’t we all lost a few things? I’ve definitely parted ways with a few items in my lifetime. My favorite jean jacket. At least three iPhones. Money. Wallet. Dignity…the normal stuff. Things that go missing can be small and insignificant, others expensive but replaceable. But, then there those possessions that are priceless. The kinds of things that when you lose them, your heart drops to the floor and a dark feeling of panic and, “What do I do next!?” surges through every vein of your body. It’s not a great feeling.

You know the saying, “…like finding a needle in a haystack?” Well, it “rings” pretty true for this wild story (pun intended) about a woman who lost something very sentimental–on a long, sandy tropical beach for 40 days.

Doug Cotty and his brand-new fiancée Michele Arias just got engaged on their trip to Costa Rica, on December 8. He got down on one knee and proposed to the woman of his dreams at the top of a volcano, giving her a custom-built 1-carat diamond ring made from a stone that had been in his mother’s family for generations. 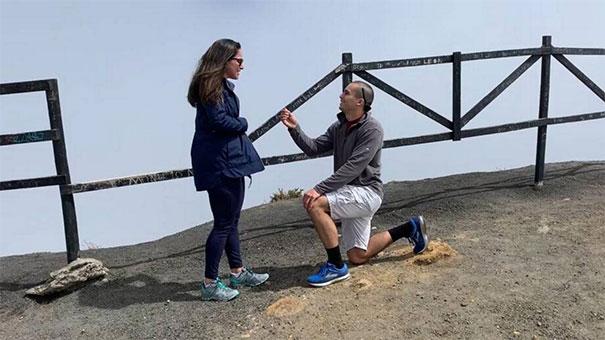 It was only days after the proposal, on December 11th,  that Michele took the ring off to put on sunscreen. For “safekeeping” she put the ring in Doug’s shirt pocket. It was shortly after that, the family heirloom ring Doug had placed on her finger disappeared into thin air. It was gone, and Michele’s stomach was in knots. The couple frantically searched the area, digging around and asking anyone nearby to help them find it. Hours later, and with blisters on their knees, the couple gave up hope. They figured someone else had found it, or the seemingly endless pit of sand had gobbled it up and it was just gone. The couple flew back home to Denver, sad and defeated, trying to remain hopeful. They were engaged, after all!

Still, they didn’t give up. Michele posted on a Facebook group for the residents of the particular area of Costa Rica they were staying in, Costa Ballena, explaining her heartbreaking story, pleading for help. People commented, and made promises to keep an eye out, but no one was able to offer any leads–except for one strange message that was rather cryptic in meaning but provided a glimmer of hope, and a name. “Dave Harris has been known to recover things.” Amidst all the commotion and comments, Michele failed to see this message. Had it come across her radar, she may have learned that Dave Harris is a 67-year-old American expat who, after spending more than 20 years as a firefighter in Atlanta, decided to pick up and retire in Central America, spending his days on the beach. 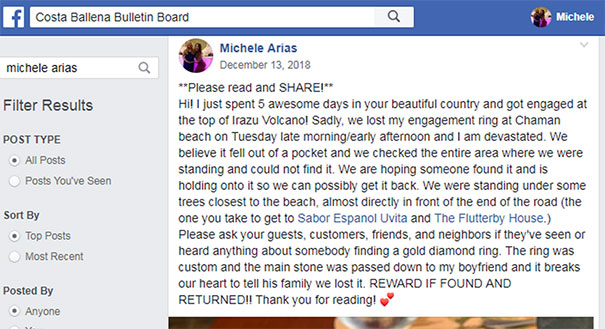 Dave was once the leader of a rescue dive team, where he learned to use a metal detector underwater, a skill he still has in his back pocket today. In fact, he found a class ring in a foot of water at low tide on Myrtle Beach back in the 70s. By looking at the manufacturer’s inscription on the inside, he was able to track down the owner and return the piece of jewelry–4o years after the ring was lost. So yeah, Dave lives up to his reputation.

When Dave saw Michele’s urgent plea on the Facebook group, he responded, “If you still have not found your ring, message me.” She didn’t respond, so he tried again: “Did you see my previous message? I have a metal detector and have found rings lost 40 years before. I will search for your ring but I need more information to narrow down the search area. And I need the information before another storm beats up the beach.”

And no reply. Dave figured the mystery had been solved, and the ring was found and returned–16 days had passed and still not a peep from the forlorn couple. Dave forgot about it until New Year’s Eve, when he noticed a reply from Michele, who says that all of his messages had gone to her spam folder. It just so happens that she opened the folder that morning and saw the missed connection.

Michele reached out, expressing her gratitude for his kind offer, but admits she wasn’t very hopeful. “It was more like, ‘Oh, I’ll let the old man try. If he wants to go out there with a metal detector, that’s cool,’” Arias recalls thinking. “But the odds of him finding it when it’s been there for a month at this point, with that many visitors, too…I mean, I just did not at all think it was actually gonna result in anything.” To add insult to injury, she and Doug had decided to buy a $4,400 replacement ring online! 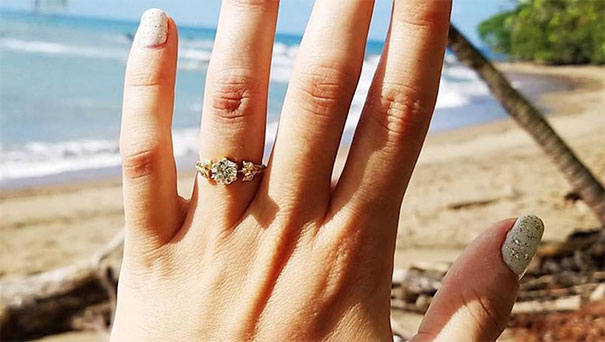 Still, Dave was sure he could find it. He waited until the tourists and cars and campers filed out, and he told Michele, “The ring, if it’s still there, is not going anywhere but straight down. I’ll wait until after the holiday crowds leave.” It was on January 9th that Dave woke up and felt an urge to hit the part of the beach Michele described to him with his metal detector.

“I probably had searched for 20 minutes, maximum,” he says. “I picked up several Costa Rican coins, and of course a lot of beer caps and nails and stuff—which, on a metal detector, is a really dull thud kind of noise. Then I got this really high-pitched ping. And I thought, ‘This might not be her ring, but this is damn sure somebody’s property. Something that’s valuable.’”

He dug one foot down and lo and behold, “When I looked down in there, the sun was up and was shining, and the ring was sitting still in some sand, but it was sitting straight up and down,” Dave says. “And that center stone was just like a beacon.” He immediately contacted Michele who was absolutely beside herself with relief, but mostly shock and in disbelief!

Dave And His Good News SMS 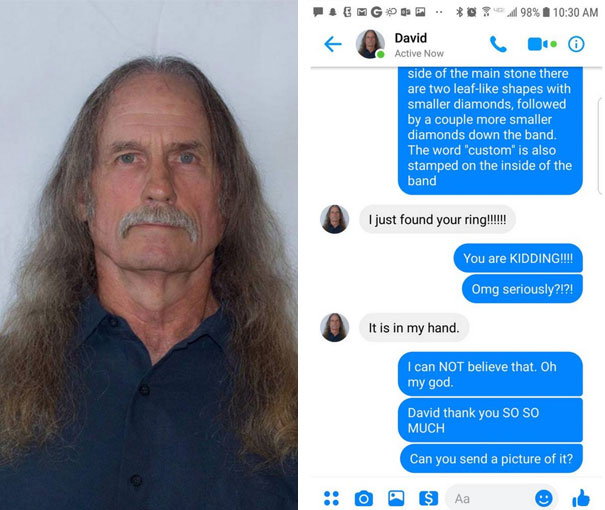 “I was like, ‘Are you sure? Like, you really did? I cannot believe this.’ He said, ‘I’ll send you a picture. I’m not very good with the phone, so I’m gonna send a picture when I get back home.’ I waited maybe another 15 minutes or so and he sent me a picture, and I was like—I mean, honestly, I was like, Holy s—. He found it. Then I immediately texted Doug, and he said the same thing.”

But, there was still one more hurdle. The ring is pretty precious cargo, and sending it to the couple via Costa Rican postage was a gamble no one was willing to take. DHL services won’t even handle jewelry that expensive. There weren’t many options, and Michele was considering flying down to pick it up herself–until a perfect option presented itself. A close friend of Michele’s said her parents were going down, and they’d be happy to pick it up on their way home. 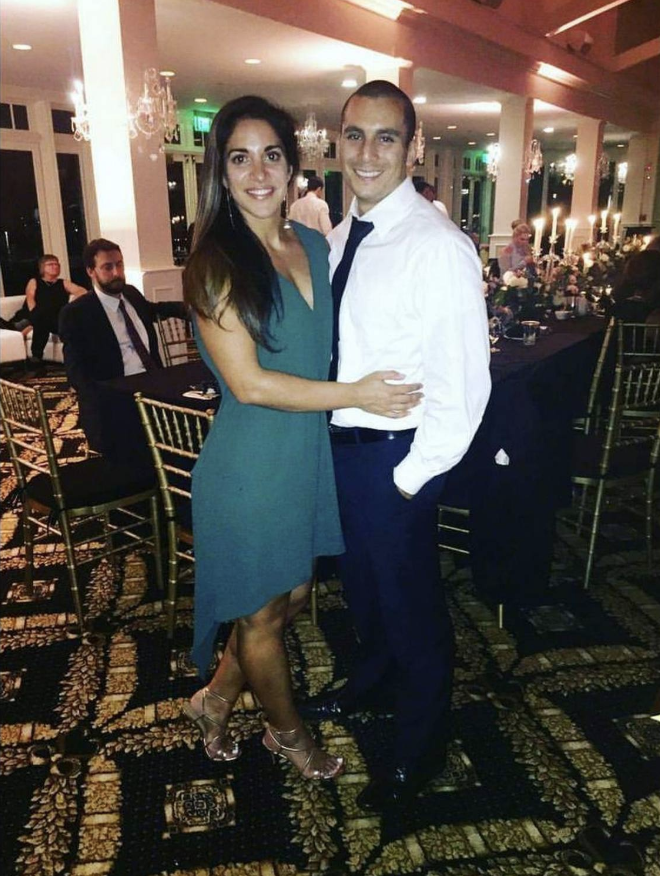 Almost perfect except that they were staying 200 miles up the Pacific coast, away from where Dave lives. Normally, this wouldn’t be much of a problem, but roads in North America are built with a little more thought and care. A 200-mile drive in the US is far more easy and breezy than driving in Costa Rica. This was the final sequence of dots that had to be connected for the ring to make it home safely! So, Michele and Doug paid $450 for a private courier to get the ring from Dave’s to the friend’s parents, Dennis and Shirley Pirkl, as they waited with bated breath for this nearly 2-month ordeal to be over.

Finally, once the Pirkl’s arrived home, Michele drove over to inspect the ring. She got emotional as she slid the piece onto her finger. “I thought I was gonna cry when I got it back, because when I think about it, I keep thinking about when we lost it, and so of course that brings up a lot of emotions. But I’m honestly just—so happy!” The couple sent $500 to Dave as a reward, but the man sticks to his guns and told the young couple what he previously told the man who lost his class ring, “I appreciate that, but I don’t sell people’s own property to them.” He is one decent human being that’s for sure!

Michele says that the replacement ring they ordered has a 30-day money back guarantee, so she’ll be returning it the moment it arrives.

Have you ever lost a ring or something of monumental value? Let us know your wild story of how you got it back!