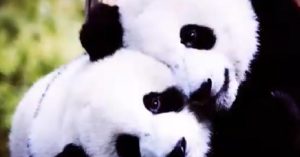 It’s interesting to see how the whole world is starting to transform now that we’re quarantined at home. Pollution is decreasing, wildlife is making a reappearance where it was once unwelcome by humans, and even waters are running clearer. While all of this is unintentional, it’s no doubt beneficial for everyone. I’d like to think that this is the way Planet Earth is trying to repair itself.

Another good thing that has happened since we’ve been staying at home more often? Two giant pandas named Ying Ying and Le Le at Ocean Park zoo in Hong Kong have finally successfully mated after staff have tried to get them to reproduce for a decade. All it took for them was for the zoo to shut down due to the Coronavirus!

Zoo officials are keeping their fingers crossed that their mating will result in a baby panda. But for now, there’s no telling for sure if Ying Ying is pregnant as it’s still early on.

“The successful natural mating process today is extremely exciting for all of us, as the chance of pregnancy via natural mating is higher than by artificial insemination,” the executive director for zoological operations and conservation at Ocean Park, Michael Boos, explained.

For reference, the giant panda mating season lasts between March and May Later last month, the zoo staff noticed that both pandas they’ve been trying to breed have been displaying signs that they were about to mate.

“Since late March, Ying Ying began spending more time playing in the water, while Le Le has been leaving scent-markings around his habitat and searching the area for Ying Ying’s scent.”

Zoo staff are pretty certain that Ying Ying and Le Le waited until the zoo closed in late January to start mating naturally on their own. With fewer people entering the park, apart from their beloved zookeepers, the two pandas had less pressure.

We won’t know for sure if the pandas will be expecting a little one for a few months, but it’s exciting to think that it’s a possibility!

“If successful, signs of pregnancy, including hormonal level fluctuations and behavioral changes, may be observed as early as late June, though there is always a chance that Ying Ying could experience a pseudo-pregnancy.”

If Ying Ying is pregnant, the zoo will be eager to share the news. The panda bear population could definitely use some new additions.

“We hope to bear wonderful pregnancy news to Hong Kongers this year and make further contributions to the conservation of this vulnerable species,” Boos said.

Whether Ying Ying and Le Le just wanted more privacy, or they were just under too much stress to mate naturally with all of the zoo guests greeting them daily, I think the fact that they’ve successfully mated now teaches us that good things happen to those who wait. Often, we try too hard to rush things, sometimes even taking shortcuts, but when things are out of our control, the best thing we can usually do is to just let things happen on their own.

Maybe when the zoo opens back up, they’ll consider providing more shelter for the giant pandas, so they can mate again next year in private!

Le Le and Ying Ying will make such an adorable cub. Check out the panda couple below.