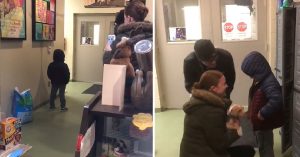 Losing a long-time family pet is devastating. I know the feeling. One of my first-ever pets was a young and spunky stray cat that would sneak into my house and sleep with me in my crib. We eventually took her in. Needless to say, we grew up together. But unfortunately, just a few months after my 17th birthday, she had to be put to sleep. It’s one of the most difficult things to emotionally wrap your head around, but in the end, you know they’re no longer suffering.

A family in St. Louis, Missouri also knows how it feels to lose a family pet. The son of the family may be young, but he still understood the concept of loss and grief. His parents saw how upset he was when they announced that their beloved dog was no longer there with them. To cheer him up, the parents had a special plan.

One day, the family of three walked into Stray Rescue of St. Louis to drop off donations shortly after their dog passed away. But little did the son know that there would be something furry in store for him before they walked back out the rescue center’s doors.

From afar, someone who knew about the surprise beforehand pulled out their phone to record the scene. In the video, we watch as the boy patiently stands in place, that is, until two staff members at the rescue center walk around the corner to reveal a puppy just for him!

Immediately, the boy bursts into tears.

“Is it my dog?” he asks in disbelief. Once he’s given a yes, he runs up to give his daddy a hug as a way to thank him.

“Sorry to surprise you like that, Buddy,” his dad responds. Don’t be sorry, Dad, you just gave him one of the best days of his life!

“Did anyone else notice what happened during that video? Even though that little guy was crying, he reached out and gently stroked the face of his new puppy and from that moment on, the puppy’s eyes never left the little boy. There was magic in that moment! A bond was formed and those two became best friends! I know who that puppy is sleeping with tonight!” one Facebooker comments.

Watch the boy meet his new puppy best friend below. If anyone deserves a new canine friend, it’s definitely this sweet, little boy!