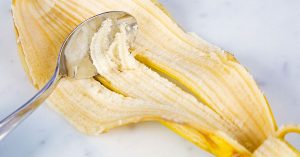 Bananas are one of nature’s greatest treats. Not only do they have a distinct, delicious flavour, they’re also packed with vitamins and minerals, including potassium and magnesium. They’re also a great source of fiber and they’re the go-to food for athletes who need a fast-acting carbohydrates to get a quick energy boost. Awesome!

But what about the peel? Sure, you can use them to decimate your opponents in a round of Mario Kart, but outside of video games, you probably don’t really think twice about them and you just throw them away. But as it turns out, chucking your banana peels is a huge mistake because they may actually be the best and healthiest part of the fruit! How is that possible? Well, check out these surprising ways that you can be using banana peels.

Believe it or not, you can actually eat raw banana peels. But before doing that, make sure you clean them thoroughly. Some people eat the peels just like that, while others choose to blend them with other fruits. But if raw isn’t really your thing, you can try boiling them for about 10 minutes before eating them. If the idea of eating the peel is still too much for you, consider scraping out as much of the insides as possible with the spoon and consuming this portion. Benefits include…

You can also apply the banana peel to different parts of your body for some amazing benefits:

Watch the video below for more details about the amazing health benefits of banana peels and don’t forget to share this with your family and friends!