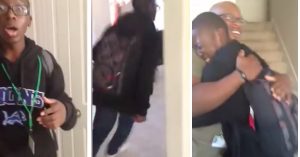 It doesn’t matter how many of them that I watch, I can’t get enough of military homecoming videos. Only a small percentage of our country’s families are military families, but they sacrifice so much so that the rest of us can live safe, comfortable, peaceful lives. We may not even think about often, but every single day there are families all over the United States that are missing a loved one. Father, mothers, sons, and daughters pack up their lives and ship out, leaving the comfort and familiarity of home behind. They travel to foreign, often inhospitable places and risk their lives to keep everyone safe.

It is not only the members of the military who sacrifice; their families do as well. They may leave their hometown to live on or near a military base where a loved one is deployed. And when their love one is gone, they keep everything running smoothly on the home front, all while missing the person they love. I’m reminded of my own grandmother, who raised two young girls on her own, all over the country, while her husband was in the Navy.

In this particular video, a mother plays a clever but heartwarming trick on her son. She hurries him along by telling him it is time to go and pick up his father, who was deployed. He had no idea that today was the day to finally see his father, and so he’s visibly excited and running around, obviously anticipating the reunion. As he rushes around, he has no idea that his father is already home. To his surprise and our delight, he runs right into him! It’s a special moment when they are finally able to embrace after a long absence. Thank you to all of the military families. We appreciate you!