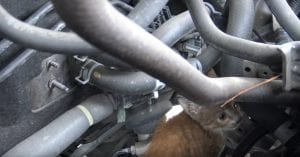 Although dogs’ vision isn’t the best, these creatures are known for their remarkable sense of hearing and smell. Due to their strength in these senses, dogs are often used to detect drugs, sniff out bombs, and find a missing person.

Outside of the criminal justice system, having an untrained dog in the home setting is also rewarding. There have been many stories told of domesticated dogs nudging their sleeping owner to wake them up in the midst of a house fire or loudly barking at a burglar to deter them from the property. Every day, dogs around the world do something to make others’ lives easier and safer.

In one viral story, a poodle’s sense of smell led her to find a trapped, helpless, kitten under the engine of a parked car.

Walking with her owner in a small town in California one day, the poodle stopped near the parked car and began ferociously barking. Her owner knew something was up and decided to scope the vehicle for whatever her canine was getting antsy about.

As her dog got closer to the hood of the car and began to “scratch” at it, the woman decided to lift it up to reveal a small, orange kitten looking up at her from behind the engine.

Seeing what she saw, the anonymous woman called out to see if anyone nearby was the owner of the vehicle. Unfortunately, everyone was silent. Not long later, however, the owner of the car came from around the corner, curious at what the woman was doing.

After the owner of the vehicle realized there was a kitten under her hood, she instantly knew who to call: Hope For Paws. Hope For Paws is an animal rescue organization in the Los Angeles area that saves animals who are at risk of death or danger.

While it would seem like an easy case for the rescue team, the kitty was a bit of a wild one. Every time the rescuer tried to reach for the kitten, they would hiss, bite, or scurry away.

The main rescuer was confident that grabbing the kitten wouldn’t be too difficult, however, what made matters worse was that the car was parked near a busy street. If the man scared the kitten too much, he worried the orange fella would run out into traffic. Of course, it would be dangerous to move the vehicle the kitten was in, and there wasn’t anything that could legally be done to make the road any less busy. But the team of rescuers had a great idea that would keep the kitten safe during the rescue: set up a plastic gate between the car and the road.

To everyone’s surprise, however, as the plastic fence was being placed, the kitten decided to make a run for it, heading towards another parked vehicle. At first, they lost him, that is until they spotted him hiding behind the wheel of a car and were able to eventually pick him up.

The kitten, who was later named Axle (get it?), was cleaned and bonded with, so eventually, he could find his forever home, and then he did.

Since his rescue, the kitten has becoming loving, playful, and very social with humans.

Scroll down to see Axle getting rescued!