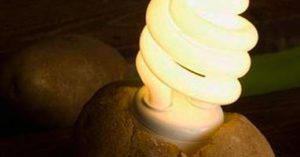 Look, I love potatoes. Baked potatoes, mashed potatoes, scalloped potatoes, french fries, chips… you name it, I’ll eat it. They’re absolutely delicious. Perhaps they’re not the healthiest but they do have their share of nutrients. Potatoes contain vitamin C and D, as well as minerals such as calcium, potassium, zinc and magnesium. Not too shabby! This starchy tuberous crop is also easily accessible for most people, relatively inexpensive, and easily stored for months! But if you’re still a potato hater, here’s some news that will turn your world upside-down: the humble potato can be used to produce enough electricity to keep a room lit for over a month! That’s right… potato power is a thing!

Haim Rabinowitch is a professor of science and agriculture at the Hebrew University of Jerusalem. Rabinowitch and his team figured out a way to transform a potato into a surprisingly powerful battery. Apparently, a raw potato can produce power on its own but after boiling it for eight minutes, it produces ten times that amount. It should be noted that the potato itself isn’t an actual energy source. By attaching two metals to the potato, a chemical reaction takes place that allows energy to be released.

The full potato battery kit consists of a potato, two metal electrodes and alligator clips. With this kit, Rabinowitch proved that a potato could be used to provide a room with LED-powered lighting for as long as 40 days! Considering that potatoes are one of the world’s most abundant food crop, this is an amazing development for supplying power in poor and underdeveloped regions!

Watch the amazing video below and don’t forget to share this story with your family and friends!