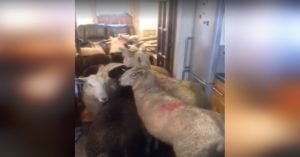 One of the best things about having pets is getting to witness the unexpected things they do. While we don’t condone everything that our pet does, like the dog shredding the couch cushions while we are away at work, the surprises our animals come with can still bring excitement into our lives.

Unexpected was certainly an understatement when farmer Rosalyn Edwards of Devon, England walked into her living room after hearing odd noises from the kitchen. When she got there, she discovered nine of her sheep in her living room! Fortunately for us, the humorous footage was caught on tape. Since being posted on Facebook, the video has earned over 206,000 views.

In the footage, we watch as the sheep are all crammed in the same doorway, acting as cool, calm, and collected as ever before. Those silly creatures! But the sheep aren’t the only surprise; it looks like in the video, they’ve also left a big, nasty mess on the floor.

Apparently, Rosalyn’s Border Collie puppy, Rocky, was to blame for leading the herd into his owners’ house through the back door. Poor Rocky saw the gate to the house open and took it as a great opportunity to give the sheep new shelter. “Rocky the sheepdog brought a whole new meaning to ‘bringing the sheep home!’” says Rosalyn in the description of her video.

Mind you, Rosalyn posted the video during late October a few years back. Who knows, maybe Rocky was just trying to give them a warm place to stay before winter settled in!

Rosalyn sure thought the occurrence was hilarious, although she definitely had a muddy, poopy, wet mess to clean up after she and her husband evacuated the wooly beasts back to the great outdoors. Animals will be animals!

The farmer also learned a bit of a lesson from the experience, according to what she told to the Telegraph: “Rocky did look quite pleased with himself, but he’s going to need more training.”

It’s always good to find lessons in the bad moments. While Rosalyn may be right that Rocky needs more training, the poor puppy thought he was trying to help. Next time, we just hope Rocky won’t lead any more farm animals into the wrong “corral.” I’m sure the Edwards’ floors will sure appreciate it, too!

Watch the scene of the sheep in the farmer’s living room below! What’s the silliest thing your pet has done?