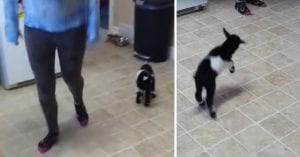 As the saying goes, “Monkey see, monkey do.” Simply put, this refers to learning via the act of mimicry. Even if we don’t actually understand the intent behind the action we’re copying or the deeper knowledge behind it, mimicking the behaviors of others is still important, especially during our younger years. Both animals and humans learn through mimicry.

For example, think of a parrot. If we say a certain word or phrase out loud, the bird may mimic us by repeating the same thing. Additionally, show a child how to make a paper airplane, and just from watching alone, they may quickly grasp how to make one themselves. It’s incredible how powerful a role imitation can play in our development.

In a viral video featuring a baby pygmy goat named Johnnie, the goat patiently watches as his human mom hops across the kitchen.

After a couple of times, Johnnie decides that he, too, wants to learn how to hop, which he has yet to demonstrate. However, with enough will power, the tiny black-and-white goat starts hopping in the same direction as Mom!

At first, the small creature struggles with imitating his momma, stumbling over his little feet. Baby Johnnie may be a bit clumsy while he’s practicing, but watching him learn is oh-so-cute! One day, the little guy will be able to master this skill with enough practice.

Although the footage is absolutely adorable, there’s a bigger purpose behind teaching the baby goat to hop.

According to one of Johnnie’s owners, “Baby Johnnie’s mom won’t feed him and his sibling died. We are bottle feeding him and he spends all his time in the house with us.”

Due to Johnnie’s upbringing, the owners of the pygmy goat are determined to help teach Johnnie the skills he needs to thrive like the rest of his goat friends. Hence, this is why his human mom was teaching him the skill of hopping from the start.

His human mom may not look anything like his goat mom, but it’s clear that the goat sees her as a mother figure. In fact, he picks up very quickly and hops across the kitchen almost exactly as she does!

While his human mom won’t completely substitute his birth mother, she still plays a prominent role in his life. The rest of Johnnie’s human owners will continue to help him grow, explore his world, and learn everything he should know to be an independent pygmy.

Check out Johnnie the pygmy goat hop in the video below. What a fast learner!