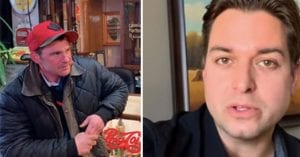 People say that it’s so easy to take things around you for granted. The food on our table, the roof over our heads, and our loving families all seem so basic when we compare our lives to those who we think have so much more than us. It’s so easy to not look at what we have and be thankful for it. But, do we ever think about those who are less unfortunate?

Homelessness is a big problem in North America; some areas have more homeless people than others, but the truth of the matter is that there are too many homeless people on the streets and not enough shelters and facilities to look after them and their needs. These homeless people are also looked down upon, so it’s never easy for them to find a good job or make friends with people.

One such man is Adam, who is homeless in Alberta, Canada, and down on his luck. One day, when he was sifting through trashcans, Adam found a picture of Bambi in a broken frame. He ended up taking this photo to Curiosity Inc. an antique shop owned by Alexander Archbold, to see what he can get for it.

The photo frame caught Alexander’s eye and Adam walked out of the antique shop with $20 for it. Adam’s day was made, $20 is a lot of money for someone who is used to nothing and living on the streets. It was after Adam left that Alexander took a more careful look at what he had just purchased off of the man. He initially thought that the vintage photo was worth about $100,  but upon closer examination, he noticed that it wasn’t something that had been mass-produced. The picture actually had a very old authenticity certification on it and it was dated back to 1937. The drawing turned out to be a part of the original frame of film back when it first released!

Alexander then contacted a gallery in the US and they valued the picture at $3,500! Alex felt bad for lowballing Adam, decided to sell the image for $3,700 on eBay, and find Adam to give him his share. Alexander eventually started a fundraiser for Adam as well, and by the time he had found Adam, he not only had the homeless man’s share to give him, but also an additional $18,000. Absolutely fantastic!

To get more of the story, be sure to watch the video below!