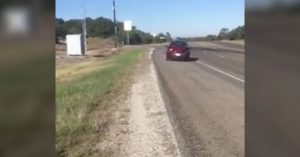 When life throws you a really annoying curveball, you have to come up with a creative solution so you don’t lose your mind! If you’re like me, then you’d like to keep your sanity for as long as possible, right? That being said, if I find myself in a situation where I feel like I might flip my lid, I’m going to try my hardest not to. I’ve had to improvise countless times, like using a Frisbee as a plate, or making impromptu cutlery out of lids and cut-out aluminum foil. I’ve even mastered the old opening-a-bottle-of-wine-using-a-shoe trick! Needless to say, I’m pretty good at going with the flow and admire people who are the same!

Even though this guy didn’t have to improvise in the exact same way as I have, he still put on his thinking hat to come up with a temporary solution to help make his dire situation a little more bearable. And, if you ask me, he succeeded!

Stuck on the side of the road somewhere near Rockdale, Texas, USA, Nicholas crashed his car. Nobody was hurt, but it was a little more than a fender bender – it’s safe to say his fender is beyond bent. The hood is crunched up, revealing all the inner workings of the engine and the headlight is barely hanging on. Oh, and the horn is on constant replay.

The horn has been set off and it won’t shut off. It goes on and on and on, whining with intensity and urgency. I loathe the sound, it gives me anxiety, as I imagine it would to anyone standing nearby. But, Nicholas over here, he’s a rock. Although I’m positive he tried his darndest to shut it off, the horn is relentless and so, he’s had to adapt.

Rather than crumbling underneath the stabbing sound, Nicholas hums a melody on top. He’s using the beat of the horn as his percussion to keep the rhythm while he hums an epic tune and hits record on his phone. And, the best part? Nicholas is a songwriter and pulled this little ditty right out of thin air! It sounds pretty good, it’s fun to watch and it was definitely entertaining for him. There are a few influences I could pick up on, but nope, this is an original! Not bad for a spur of the moment way to waste time! I think this full song needs to get realized!