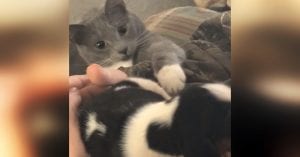 When we get a new pet, we tend to worry about how our other pet will react when we bring them home. Will they get jealous that they are no longer our only fur baby? Will they get angry and attack the new pet or vice versa? Will there be a never-ending battle between the two pets regarding who’s the dominant pet of the house? There will always be concerns with bringing a new pet home in general, but knowing that we have another animal already at home adds to the stress.

However, sometimes we make up scenarios in our head to be prepared. In the end, it can sure be a huge sigh of relief when we discover that our current pet and our new pet get along very well. It not only makes the transition of bringing home a new animal easier for us personally but also easier for both the new animal as well as the pet we already have at home.

In one viral video that has earned almost 16,000 views to date, we witness the beautiful moment where a gray-and-white housecat meets its newest housemate: a four-week-old puppy. While we might assume that the meet-and-greet would be unsuccessful considering the size and species differences between the two furry friends, the two actually get along quite well.

As the owner cuddles the newborn pup on the couch, the curious housecat comes over to take a peek. The big, glossy eyes with enlarged pupils on the cat’s face tell us that they are having trouble identifying what the new baby of the household is. “That doesn’t look like a cat to me!” I imagine them thinking. The poor kitty may even be a little nervous by the wiggling, furry creature being held in the arms of her owner. Nevertheless, the cat doesn’t seem opposed to the idea of having another animal in their territory.

At some points in the video, you even notice that the cat lightly taps on the puppy every now and then. It looks like the feline definitely wants to be their friend!

Although there are certainly some confusing feelings going on as the cat get familiar with the tiny puppy for the first time, one thing is for sure: the interaction is heartwarming! Surely, the owner of the pets was happy to know that the cat’s first impression of the baby hound dog was not an envious one.

Don’t forget to watch the cat meet her owner’s new 4-week-old puppy in the video below!