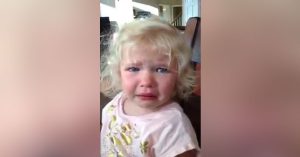 There’s an unfortunate aspect of life that everyone has to learn sooner or later: you don’t always get what you want, even if it’s something that you really, really want. For example, I want to be sitting in some exotic locale with a cold drink in my hand and my favorite book in my lap. But, I’m in my little house with a to-do list that is more than a mile long.

The Rolling Stones may have said it best — “You can’t always get what you want, but if you try, sometimes you get what you need.” On the surface, that seems like an uplifting statement but in many circumstances, it’s actually kind of depressing. Wants and needs are two very different things, and let’s face it, what we need doesn’t always make us as happy as what we want.

The adorable little girl in this video knows exactly what she wants, but it doesn’t look like she’s going to get it. When her parents ask her about her new baby brother, she is adamant that that is not at all what she wants — she wants a baby sister.

At first, I assumed that she didn’t want a baby sibling, at all. Bringing a new baby into the life of an only child, especially when she isn’t really old enough to understand the change, must be a difficult thing for any child to accept. Up until that point, the oldest child has had all the attention of her parents. As a first child, she was likely doted on by not only her parents, but family, extended family, and friends. Her life has been one long stream of people paying her valuable attention and generally making a fuss over her.

But, that’s not the case, at least in terms of wanting a new sibling. This little girl absolutely wants a new baby in the family, but she wants a baby sister and under no circumstances does she want a baby brother. As sad as this is, keep in mind that toddlers aren’t the most emotionally balanced individuals and are just as likely to cry over this as practically anything else. There’s a good chance that she’ll feel differently tomorrow.

In any case, we can hope that even though she isn’t getting what she wants, she’ll get what she needs — a healthy, adorable baby brother who can be her friend, playmate and the companion who will share the unforgettable experience of growing up in their world.

Watch her adorable opinion on her new sibling in the video below!