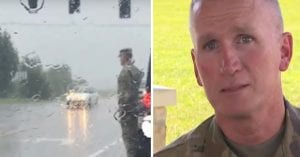 Respect is one of the greatest qualities anyone could ever have and give to others. When we respect someone, something, or even ourselves, we’re proving how mannered and courteous we are. Although we should do it from the goodness of our hearts, showing respect can bring us many benefits in life. This includes a better chance of landing a job, stronger relationships and friendships, and an all-around better reputation.

Tennessee Army National Guard soldier, Col. Jack Usrey, went viral after he engaged in a respectful act. On July 6, 2017, Usrey was spotted standing outside his car saluting in the rain during a funeral procession. The Colonel may have been busy driving to Fort Knox, Kentucky that afternoon, but stopping his car to show honor for the procession was something he felt he needed to do.

Fortunately, Usrey’s act did not go unnoticed. Onlooker Erin Hester saw the scene and decided to take a photograph of the saluting soldier from her vehicle.

According to Hester in an interview, “We had come to a red light when the intersection was blocked by our local police department. The procession lasted at least a minute, and he stood the entire time at attention.”

Hester was genuinely happy to witness such a form of respect that she had to post the photo on social media.

“I was so completely touched by this today. I always get frustrated when I see cars that don’t pull to the side and stop for a procession, but this gentleman went above and beyond. It made my heart happy to see the amount of respect that this gentleman showed a family that he doesn’t even know,” Hester continues in a Facebook post.

Since being posted, Hester’s post has received over 133,000 shares and 195,000 likes. She also posted the message and photo she took of Usrey on Instagram, which earned over 900 likes.

“I didn’t really think. I just did what my parents taught me to do growing up. I stopped, got out, saluted the police escort and held my salute as the hearse and family drove by,” says Usrey.

The best acts of respect are the ones that are done for nothing in return! Regardless, Usrey deserves appreciation, recognition, and respect for his kind heart. People like him are incredibly inspiring and remind us to be a little more humble each day.

Listen below to the rest of Col. Jack Usrey’s interview below!