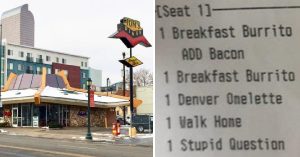 Ask a decent-sized group of people what their number one pet peeve is, and at least one person will say that one of their biggest annoyances is when people ask them a silly question. Although some of these folks may simply give a snarky answer in response to the foolish questions people ask them, Tom’s Diner in Denver, Colorado, has a different way to penalize people whose questions are, well, “stupid.”

For years, the 24-hour diner has been charging a small fee to customers who asked something ridiculous. Recently, a photo of a receipt from the restaurant that included a $0.38 charge for one “Stupid Question” was posted on Reddit where it became viral.

But no worries; the intent of the stupid question charge isn’t to make their customers feel unwelcome. Rather, Tom’s Diner does it just for kicks.

Landry mentioned that his uncle, Tom Messina, added the charge to the menu approximately 20 years go when the diner opened in 1999. The intent of this addition was to create a bit of entertainment for both customers as well as the staff.

“When we have a good fun table that engages with us or when they ask about the charge, it’s always fun to add it on,” Landry said.

Of course, customers aren’t given the charge if it’s debatable whether or not the question they’ve asked is so-called “stupid.” Instead, the charge is typically given to lively groups as a way to spark some laughter by the time the bill comes ’round.

In all fairness, Tom’s Diner refrains from charging too much for this humorous menu item. “It was 48 cents at one point, but we didn’t want to gauge people.” For the most part, customers thoroughly enjoy the comedic atmosphere of Tom’s Diner. “The majority of people really get where we’re coming from and understand it’s meant to be playful. Over the years, maybe a few people have been perturbed but the response is generally positive.”

In fact, some customers intentionally ask a stupid question for fun such as, “Does your ice contain water?”

Apart from the stupid question charge, about two years ago, the diner added some more humorous menu items alongside their usual chicken fingers, buttery biscuits, and old-fashioned meatloaf. The additional items were listed under the menu’s “Healthy Options:”

In the future, the chain may add other items such as “Love Each Other,” and “Don’t Take Yourself So Seriously.”

Apart from the silly menu items, Tom’s Diner also has a sign hanging up that reads, “Practice Safe Eating… Please Use Your Condiments!”

“It’s all about not taking yourself too seriously. We’re not here for a long time, so let’s enjoy ourselves and try to make the most of this life.”

Check out the video below for more information on this news story.