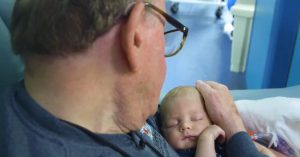 In high school AP Psychology, I remember learning about Erik Erikson’s psychosocial stages of development. According to his theory, throughout each stage of our lives, we experience a different psychosocial crisis based on an age-appropriate existential question. If we develop wholesomely over the years, the outcome of each crisis we experience at each stage should be positive. However, Erikson doesn’t leave out the possibility that we could experience a negative outcome as well. The whole point of Erikson’s theory is to discuss the psychosocial battles we go through as our personality develops. And if we experience a negative outcome along the way, we can know where we went wrong, so we can work to successfully advance to the next stage.

I would say at some point, almost 85-year-old David Deutchman successfully developed through Erikson’s Gereativity vs. Stagnation Stage where the primary goal is to contribute back to the community and give back to future generations. When Deutchman retired at age 65 in 2000 as an international marketing executive, his next focus in life was, in fact, helping youth.

Due to his generativity, the caring grandpa started off giving guest lectures in various universities in the Atlanta area.

“Everything I found fulfilling was working with kids,” he said.

Still feeling a strong need to give back, Deutchman decided to volunteer at Children’s Healthcare of Atlanta at Scottish Rite. He started off teaching the children before finding the perfect calling for him.

What led the man to start engaging in the volunteer opportunity was the sad reality that many premature babies don’t get held enough. Due to medical complications, these babies often lie in the hospital with little human interaction. While many of the parents do make regular trips to the hospital to check on their child, most of the child’s early infant life isn’t spent with bonding with another human.

But Deutchman is helping resolve that problem. He started off holding one couple’s baby. 15 years later, he has now held over 1,200 infants!

While it might seem like a simple voluntary act, experts say it’s definitely impactful. Witnesses watch as a crying infant immediately stops crying once in Deutchman’s arms. Clinical Nurse Angie Hawthorne also discussed how holding babies, especially premature babies who are going through a difficult time, can help reduce their pain and provide the comfort they’re craving.

Deutchman also knows the importance of his volunteer work, hence why he volunteers twice a week. He spends time in the pediatric ICU every Tuesday and the neonatal ICU on Thursdays. Apart from helping babies, Deutchman also enjoys comforting new parents and even spending time with older children.

“Choosing to be soft is very powerful,” he said. “If everyone were a little softer, the world would definitely be a better place.”

I couldn’t agree more with that statement. I find it sad that we live in a world where being tough and “hard” are prioritized over being kind, empathetic, and loving. It’s about time that we bring those soft, positive emotions back and strongly encourage others to do good in their community.

Hear more about the inspiring ICU by watching below.