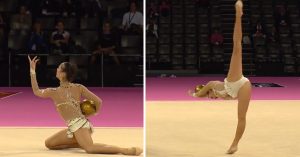 Not everyone is interested in sports. For the folks who fall under the latter category, what may interest them, however, is rhythmic gymnastics. While it’s still considered a sport, it has close relations to the arts. We all love music, and most of us enjoy good choreography when we see it, so who can go wrong with a good ole rhythmic gymnastics performance?

Perhaps one of the best rhythmic gymnastics performances of all time goes to Russian gymnast, Daria Kondakova, specifically her 2011 routine at the World Championships in Montpellier, France. With her dark hair pinned back, a sparkly outfit, deep red lipstick, and a golden ball in hand, Daria’s elegant routine earned her 10 million video views to date!

The gymnast from Sochi, Russia, who was only 20-years-old at the time of this particular performance, starts out gracefully sprawled out on the ground with her golden ball just under her upper back. The performer begins quickly the second the music starts, almost like she has a timer at the back of her head. Right away, she shows off her flexibility, agility, and grace both through her elegant moves and through her use of her golden prop. She may be young, but she certainly has experience.

In fact, young Daria gets cheers from the crowd when she performs a tasteful twist as she holds the ball in the air. Then later into the routine comes my personal favorite move from her: when she spins with one of her legs straight in the air while she bounces the ball on the ground. And to think that I can’t even pat my head and rub my stomach at the same time!

Right after the latter move, Daria tosses the ball in the air, does a somersault, catches the ball between her thighs, and pops herself up on her knees where she sits sophisticatedly as the audience gives her a big ’round of applause. What a great show!

Apart from Daria Kondakova’s amazing 2011 routine that has gone viral on the web, the gymnast certainly has other accomplishments to celebrate. She earned gold at the Holon Junior Grand Prix, Calais International Tournament, and European Junior Championships in 2006. A few years later at the age of 18, she won silver at the World Championships and repeatedly won more silver medals thereafter throughout other competitions, all of which were well deserved.

Observe Daria’s impeccable performance below. She gets a definite 10 out of 10 from me!