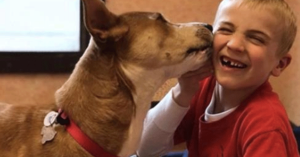 Upon walking into an animal shelter, immediate sensations of sadness and guilt often fall over us. Whether we are at the shelter to adopt or just to look around, we wish we could save each animal there. However, financially and physically, it’s typically not an option.

But, 7-year-old Roman McConn didn’t let the latter obstacles stop him from saving dogs from high-kill animal shelters in Texas and Georgia. In fact, to date, he has now helped a whopping 1,300 dogs find homes in the Pacific Northwest via his organization, Project Freedom Ride.

To help dogs find loving homes, Roman films a quick video with each dog he wants to highlight. Afterward, his mother helps him post the videos online, hoping someone will be interested in adopting one of the dogs. Roman has been doing this since the age of four.

According to Crystal Eskola, the director of Augusta Animal Services, Roman picks to highlight dogs who have been at a shelter for a long time, ones that are at risk of euthanization. With his use of social media, he prevents hundreds of dogs from potentially getting put to sleep.

Fortunately, Roman was given back for his heart of gold. After receiving the ASPCA’s 2018 ‘Kid of the Year’ award, Roman was featured on Ellen DeGeneres’s show.

On the show, Ellen asks Roman why he does what he does. In response, the adorable boy says, “So, we when lived in Texas, and I would see that there were dogs outside of Petsmart that were just in crates with a tiny bed in them, I wanted for them to get adopted.”

However, what makes Roman’s reaction different from many of us is that he actually does something in response to what he wants to change.

“I care so much about helping animals and shelter because I believe they deserve more than a life in a kennel,” says Roman during his ‘Kid of the Year’ speech. “It’s very important for me to help these animals get out of shelters and into loving homes where they will be loved, treated how they deserve and made a part of the family.”

To learn more about Roman McConn and Project Freedom Ride, watch his interview with Ellen DeGeneres below. You will get a kick out of Roman’s cuteness!