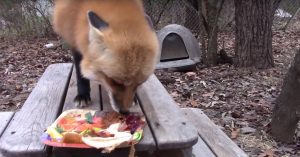 Thanksgiving may be over, but visions of smokey turkey legs and freshly-whipped pumpkin pies still dance around in many of our heads. But if you believe humans are the only ones who enjoy this special day to give thanks, well, you’re wrong.

RonRon the fox is one critter who absolutely adores Thanksgiving. The way he chows down at a plate of Thanksgiving favorites in one viral video proves that he might even love the autumn holiday more than we do!

Beginning the clip, RonRon’s owner, Eric, is chatting with the sweet, reddish-furred fox before giving him his meal. Excited that it’s about to be his feeding time, RonRon can’t contain his excitement; you can see it in his big, shiny eyes! The way he’s rapidly moving about communicates that he’s getting antsy and maybe a little agitated with his owner for stalling.

Once Eric says “Happy Thanksgiving RonRon!” and gives the furry friend a festive plate piled with turkey and other tasty goodies leftover from his own Thanksgiving party, the fox immediately jumps on the table to begin eating.

Out of everything on the plate, RonRon appears to enjoy the turkey skins the most. (I feel you! The skin is the smokiest and most flavorful part of the turkey.)

Besides RonRon’s rapid eating, the fox’s love for his holiday plate is even more so apparent when he began showing signs of possessiveness as his owner got too close, letting out a threatening hiss-like sound. “Back off!” RonRon warns.

As if I wasn’t already enjoying the critter in the clip, Eric’s chit-chat in the background had me rolling. “Don’t wolf it down; you’re a fox!” said Eric as RonRon had a large piece of food in his tiny stout.

But RonRon has about had it with his owner at this point, fearing that he might try to take his beloved meal away at any moment. The fox quickly snatches a piece of sliced turkey and makes a run for it to finish his last few bites elsewhere! Smart boy.

After filling his tummy with great food, RonRon licks his lips and lets out a cry. I guess you could say he’s pretty satisfied with the offerings!

Watch adorable RonRon quickly devour his scrumptious Thanksgiving dinner in the video below! Do you ever give Thanksgiving scraps to your pets at home?

Since it’s still the holiday season, make sure to share RonRon’s cute clip on social media to add some positivity to your feed.