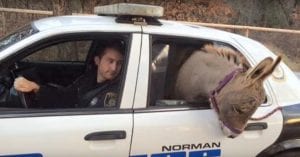 Police officers experience crazy things while on duty. From erratic behavior to reports of bizarre crimes, police officers have seen it all. Just ask one, and they’ll give you the rundown of every wacko they’ve come in contact with.

It’s no wonder that when Police Officer Kyle Canaan got a call about a stranded donkey near a busy street in Norman, Oklahoma, he was pretty confused but nonetheless entertained. He might have been expecting about someone robbing a local jewelry shop or a couple of men engaging in a bar fight, but anything to do with a donkey was the last thing on his mind!

Once Officer Canaan received the call, he was informed that a random passerby, Robin Strader, had pulled the donkey away from the highway, so he wouldn’t get hit. To want what’s best for both fellow drivers on the road as well as a stranded creature who’s in danger of potentially getting hit isn’t too strange. With an animal so big and heavy, it’s also not too strange to call someone out to perhaps help find a safe enclosure for the animal. I mean, many of us might feel helpless in that situation after all! Asking for help might be the best thing we can do.

But the true reason Strader called the police was to ask if they could help transport the lost donkey, who they named Squishy, to their home a few miles away since her car wasn’t big enough for the hoofed beast. A strange and interesting inquiry!

“Our officers encounter unexpected things every day while on duty,” the Norman Police Department says in the caption of a photo they posted on Facebook. “This morning, Officer Kyle Canaan responded to a call regarding a donkey on the loose in the 8100 block of 120th Avenue NE. To ensure the safety of the animal, he helped transport the donkey to a nearby home for safe-keeping until its owner could be located. It’s not every day that you see a donkey in the backseat of a police car!”

With a request quite out of sorts, and perhaps less serious than many of the other calls the Oklahoma officers would be receiving that day, you’d think Officer Canaan would turn down the request. However, he was a good sport and agreed to help transfer the donkey to Strader’s home!

“Bravo…may be the only time you see a donkey but won’t be the last time a jackal is in the back seat of that vehicle! Great job officer!” says one commenter on the City of Norman, Oklahoma Police Department’s Facebook post.

Learn more about this crazy story by watching the video below! If you’re a police officer, what’s the craziest thing you’ve ever experienced on the job?