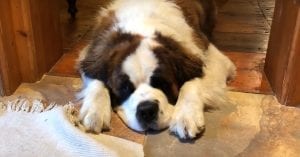 Not all dogs are given the luxury of an easy life. Some are left on the streets to fend for themselves. Some may be born with physical setbacks or may develop difficulties later on in life. Others might have been raised in an unsafe or abusive environment. Just like us, canines have their own individual struggles.

For Cosmo, the 130-pound Saint Bernard, nothing was really “wrong” with him; he was born happy and healthy. However, his breeder dropped him off at the Hearts United for Animals shelter in Auburn, Nebraska one day. The reason? Nobody knows. But one thing was for sure. After being dropped off, Cosmo was friendly and gentle to the shelter’s volunteers, showing zero signs of abuse or neglect. The dog would be a great candidate for adoption.

Not long after being in the shelter, Jayne and her husband, a couple living in New York, decided to fly to Nebraska to potentially adopt the Saint Bernard. Jayne was worried Cosmo would be anxious and hesitant or even aggressive upon meeting her. Being in a shelter, there’s no telling where the dog came from, what his previous owner was like, and how he was treated in the past.

Fortunately, the dog had no problem being approached by Jayne. The two fell in love with each other at first sight!

“I don’t know if Cosmo has any understanding of what’s happening, but I think he understands there’s a human here who wants to give him some love, and he’s pretty happy about it,” Jayne said.

So, his new owner drove all the way from Nebraska to Upstate New York with the large canine comfortably resting in her large trunk space.

While Jayne knew Cosmo would be a great dog, there was another worry that crossed her mind. How would her newly-adopted dog get along with her other canines, Grendel and Poppy? It’s like the universe conspired in her favor because the Saint Bernard’s calm and loving nature ended up making him a shoo-in with all three pups. Cosmo even loves Jayne’s large rabbit!

While shelter life can be rough, Cosmo immediately began finding comfort in his new home. Oh, how comfortable and cozy it was compared to being in a dark, cold, encaged area! Jayne was happy to see her new furry friend easily adapt to his new environment: “It’s nice to see him on a big space, see him spread out and put his belly on a cool floor, and just know he’s finally staying in a space, a place where can feel happy and comfortable.”

To make matters even better, the adopted canine became instant friends with Jayne’s children, Alice and Owen. It’s almost as if they were long lost pals!

Cosmo could not have a more loving, welcoming home than where he is now. With the warmth, friendliness, care, and attention that he is consistently given, he’s thoroughly enjoying his permanent stay at his new residence.

“Animals just understand life a little bit better than people sometimes. It’s like they know what’s important, and if they have love and food and a roof over their heads…that’s all that really matters,” Jayne says.

Make sure to watch and share the video of Cosmo below! It looks like the canine found the perfect forever home.