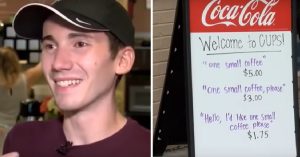 Working in any job involving customers, you’ll inevitably come across rude people. It doesn’t matter if you’re the sweetest person alive or the best employee on the planet; some customers can be disrespectful, and they don’t care to hide it.

Even Justin Simms’s, the owner of CUPS Coffee & Tea in Roanoke, Virginia, has had his fair share of rude customers. He says some customers have a generally bad attitude while others have short, ill-mannered responses to the employees while ordering, failing to say simple things like “please” and “thank you.”

Although the coffeehouse is now reportedly permanently closed according to sources online, Simms had an excellent idea to get customers to be kinder: putting up a sign explaining to customers that the ruder they were, the more they’d be charged.

Word certainly got around about the hilarious take on an average outdoor sign. Just a day after he put it up, someone took a picture and posted in on Reddit. Not long after, or surprisingly, the photo on Reddit went viral.

But the humorous sign wasn’t just for kicks and giggles; the owner of the coffee shop actually charged customers based on the sign.

“I decided because I need to solve all the injustices of the world to start charging more for people who didn’t take the time to say ‘hello’ and connect and realize we’re all people behind the counter,” Simms explained.

Some might call Simms overly sensitive. “There’s absolutely nothing wrong with saying, ‘One small coffee, please.’ Anyone who gets upset over that needs to seriously rethink their life choices,” one commenter said.

Others love Simms’s idea. “A creative way to solve a real problem! Congratulations,” said another commenter.

Regardless of the others’ opinions about the business owner’s idea, one thing’s for sure: rude customers are a problem, and that’s true no matter where you go. While most employees and business owners simply shrug things like this off, Simms’ goal was to actually tackle the issue of rude customers as much as humanly possible and encourage customers to strike up friendly conversations with his staff. Too often, customers would be in a hurry or be too busy on their phones to pay the slightest bit of attention to the people helping them behind the counter, making them feel unappreciated.

Listen to what the coffee shop owner has to say in the following interview. What do you think about his plan? Necessary? Too harsh?