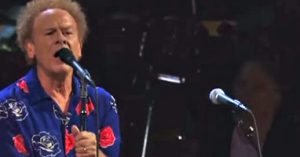 Music can be a very powerful thing but you might not really know it if you just turn on the radio and listen to some of today’s pop music. What exactly do I mean by “powerful?” Consider Bridge Over Troubled Water, a song (and album) released by Simon and Garfunkel in 1970, at a time when the Vietnam was was dying down. Tensions were high with the fear of a nuclear war, and everyone felt lost. Bridge Over Troubled Water reflected the mood of the times, while also inspiring hope. [googlead]The song reminded people that despite all of the anger and despair, as long as the “bridge” held, everyone would make it through and carry on.

The duo of Simon and Garfunkel have had an interesting relationship, which includes a bitter breakup. In the video below, you’ll see Garfunkel singing by himself but he is eventually joined on stage by Paul Simon. A truly magical moment in music history.