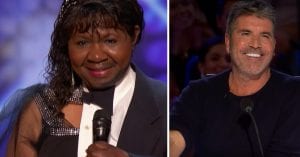 When a singer is set to appear on the America’s Got Talent stage, the judges and the members of the audience don’t expect to see someone walk on stage dressed too out of the norm. I mean, it’s American’s Got Talent; sometimes we expect people to hop on stage wearing weird articles of clothing, you know, something like you’d see Lady Gaga wearing, but still, nothing too close to a fashion faux pas.

So, when 63-year-old Adeline Bates announced at her audition that’d she need more time to get ready, people were wondering what on Earth was going on. The singer had just appeared on stage in neat, tidy clothing, so why the additional wait? Did she need to change into a more formal dress? Did she forget an important accessory? But when the singer eventually came back out, they realized what the hold up was: she had to perfect her half-woman, half-male attire! It was certainly different from the conservative wear she was dressed in before.

Immediately after she came back out on stage, the “male” side of her costume faces the audience as she sings in a masculine tone of voice to “Unforgettable” by Nat King Cole.

“She’s going to do both parts? Oh my God!” says Judge Julianne Hough as she catches on to Adeline’s plans.

As it’s time for the female part of the duet, the singer flips so that her dress and makeup-ed face appear to the audience, matching her feminine singing voice.

No matter which part Adeline plays, she does it stunningly and makes it look so simple at the same time. What’s incredible is that in the introduction of her audition, the singer mentioned that she’s been lacking the confidence to perform on stage. Yet, it looks like she’s doing a lovely job!

In fact, the judges found her performance both funny and generally enjoyable at the same time.

According to Judge Gabrielle Union, “At 63, she came out on this stage and did not one but two performances. I love that this is what your ‘me-time’ looks like.”

While Adeline’s split costume and one-person duet aren’t new inventions in the world of performing, these aren’t easy to execute, especially when you have a bit of stage fright like Adeline. Adeline, however, proves that she can pull both off well, making her perhaps one of the most versatile auditioners on America’s Got Talent to date!

Enjoy Adeline’s intriguing performance below. What an unforgettable audition!