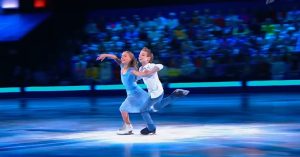 Ice skating is one of those activities that take a generous amount of practice for most people. To be great at ice skating, one must have good coordination, balance, flexibility, and agility. And those are just the basic skills required to glide on ice. With the addition of special tricks, a partner to skate with, and gliding to the beat of music, the skills necessary are even more advanced. Nobody fully respects the talent of an ice skater until they actually try the sport themselves and realize how complicated it really is.

Russian ice skaters, 9-year-old Evelina Pokrasneteva and 11-year-old Ilya Makarov, however, make ice skating look like a piece of cake. In their gone-viral performance to a cover of Leonard Cohen’s “Hallelujah” by Rufus Wainwright, the duo light up the rink like no other! Both the audience and the judges – Anzhelika Krylova, Natalia Bestemyanova, Tatiana Tarasova, Alexei Mishin, and Adeline Sotnikova – can’t take their eyes off of the tiny ice skaters.

During the performance, Evelina, who’s wearing a knee-length, icy-blue dress, and Ilya, who happens to be rocking blue jeans and a white button-up, glide into the rink while holding hands. Next thing you know, the two are lying on the ground, pointing above in a romantic scene.

If that scene isn’t romantic enough for you, when Evelina isn’t looking, Ilya plants a quick kiss on his partner’s cheek! After their cute and witty act, the skaters launch to their skates to dance in synchrony before eventually joining hands to gracefully glide together. And don’t worry: the young ice dancers have plenty of impressive tricks and moves to show off throughout the performance. Towards the end of their performance, Ilya picks up his partner, elegantly spinning her around, to which the audience cheers loudly.

After their beautiful spin, the couple lies down in their original position to indicate the end of their performance. As the audience gives them a big round of applause, they politely bow.

You might ask, “How did Ilya and Evelina become so good at what they do at such a young age?” They were trained by professional ice dancer and 2002 Olympic silver medalist, Ilia Izyaslavovich Averbukh. Averbukh has been skating for 40 years and counting, giving him the authority to teach young Ilya and Evelina the ropes of dancing on ice!

Don’t miss the fairytale-like performance below! It has something for everyone: dancing, ice skating, acting, romantic gestures – what else could one ask for?!