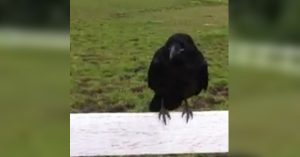 While a lot of the birds you see on a daily basis won’t attack you, some people are still terrified of them. Plus, some could bite.

In the video down below, a wild raven was perched on a white fence, squawking for over an hour. The young woman recording, and her parents, went outside to see if anything was wrong.

To their surprise, the raven had four porcupine quills stuck in him. One of them was in his wing, but the other three were stuck in his face. The family knew they couldn’t leave him in pain, so they decided to help him, which for many people, would be absolutely terrifying.

Luckily for us, they captured the rare moment. The mother of the woman recording popped on a glove for safety and got to work.

At first, Mom moves her hand near the bird slowly, and when she touches him, he lets out a loud squawk. She backs away when he tries to bite her. However, she doesn’t let that stop her. She reaches again and says, “I just want to help!”

Then, the raven turns around, and Mom takes that as her chance to pluck out the quill. The raven visibly flinches, but at least the quill is out! Her daughter makes sure to tell her she did a good job.

What’s shocking though, is that the raven doesn’t squawk, and even more surprising? He doesn’t leave. He stays perched on the fence, and easily let’s Mom pluck out the second quill. Unfortunately, she misses.

Mom goes back in to remove it. However, this time, the Raven opens its beak and attempts to bite her. Thankfully, Mom is quick and moves her hand back. He continues to squawk, but when she reaches to remove the quill, he lets her without a problem. You can tell that he’s a little hurt.

Finally, we get to the third quill, but by then, the raven is a little more guarded. When Mom tries to move closer to him, he opens his beak and his wings. She continues to talk to him, and pet him until she can get close enough. He’s visibly angrier this time around, but eventually, she pulls it out quickly!

If you’d like to see this rare moment of Mom removing the quills off of a surprisingly chill raven, watch the video below!