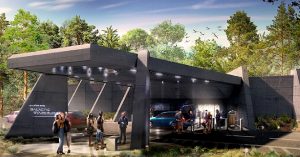 It seems like Disney is always coming up with something new and exciting. From the recent release of the movie Frozen 2 to the opening of Star Wars: Galaxy’s Edge in Anaheim, California’s Disneyland, the company never ceases to amaze us.

Soon, we can celebrate another one of Disney’s accomplishments: their new Star Wars hotel in Walt Disney World in Orlando, Florida! The hotel, which is named Star Wars: Galactic Starcruiser, will be taking reservations beginning later this year.

The hotel isn’t just Star Wars themed. According to Disney, a two-night stay at the hotel will provide a realistic, immersive experience to guests who wish to simulate life in the Star War‘s galaxy.

“Star Wars: Galactic Starcruiser is a completely new type of experience. You’re going to live onboard a star cruiser…and you can get wrapped up in the larger Star Wars story,” Ann Morrow Johnson, an executive producer for Walt Disney Imagineering, said.

Out of everything Disney has come out with thus far, the interactive hotel will be like nothing anyone has ever experienced from the company before.

“Everything in the spaceship wants to reinforce that feeling of you’re on a star cruiser, in a galaxy far, far away.”

The cabins (hotel rooms) of the starcruiser, which can each sleep up to five people, are completely unique from any other hotel you’ve stayed at in the past.

“So, you’ve got the bunk beds that look not unlike what we’ve seen Chewie sleep in, in the movies,” Johnson explained. “We’ve got that exclusive window that shows a view out into space.”

The hotel will also feature a plethora of activities from lightsaber-wielding to touring the bridge of the realistic ship.

In addition, guests will get the opportunity to explore Planet Batuu.

“Guests will take an exclusive transport, and they’ll emerge straight out into the land.”

Sounds like a blast (no pun intended) to me!

When reservations start this year, the experience itself will not yet be available. (If you want the whole package, you have to wait until 2021.) But until then, guests can still enjoy snoozing in a wicked cool, spaceship-like environment!

Get a little sneak peek of the new hotel below.