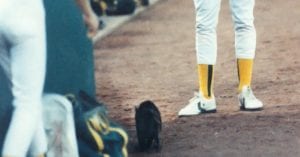 They say things happen for a reason. At the time, we might be confused or even upset when a certain situation happens. However, once we learn why it had to happen and get to witness the life lesson that came with it, everything seems to fall into place.

Well, that was the case on May 7, 1990, when a stray cat interrupted an Oakland Athletics baseball game in Oakland, California. At first, the players and the entire crowd didn’t think much of the incident. While it wasn’t expected, it wasn’t too out of the norm. That said, little did anyone know that the cat would end up making a difference.

In the video footage of the cat “attending” the baseball game, darting at the speed of light, the game instantly comes to a halt. Everyone left and right begins to laugh as the feline runs onto the field and into the dugout. At the same time, everyone figured that the short-lived scenario was just a minor mishap that they would forget about once the game restarted.

However, this very moment sparked an idea in the team’s manager, Tony La Russa’s, head. Tony realized that East Bay didn’t house a no-kill animal shelter, something he believed was important. It wouldn’t be fair in his eyes to take the stray cat to a shelter where she might end up getting put to sleep if she didn’t get adopted in time. So, in response, he and his wife decided to take in the stray cat as their own, naming her Evie.

But the idea of East Bay not having a non-kill shelter still bothered Tony. After discussing the idea of the no-kill shelter with his wife, they decided to open up their own shelter called Tony La Russa’s Animal Rescue Foundation. Since being opened in Walnut Creek, California in 1991, the shelter has saved over 38,000 lives. Wow!

According to their mission statement on their organization’s Facebook page, “Tony La Russa’s Animal Rescue Foundation (ARF) saves dogs and cats who have run out of time at public shelters and brings people and animals together to enrich each other’s lives. ARF strives to create a world where every loving dog and cat has a home, where every lonely person has a companion animal, and where children learn to care.”

Who would have thought that such a seemingly insignificant event could lead to something so important? It’s pretty incredible how something can come out of nothing.

All thanks to Evie and her baseball game incident, she helped inspire caring couple to save literally thousands of animals’ lives.

Watch the video clip of the once-stray cat running through the game to see how the Tony La Russa’s Animal Rescue Foundation technically all started!