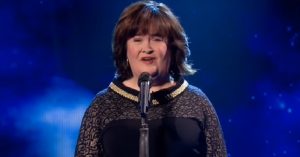 The holidays call for blaring our favorite holiday tunes on repeat, sometimes even past New Year’s! And if you’re really feeling festive, you might pop online and search for different versions or fun covers of your favorite Christmas songs, like “It’s Beginning to Look a Lot Like Christmas” by Michael Buble. I know that’s one of my personal favorites this time of year!

However, nothing compares to Susan Boyle’s cover of “Little Drummer Boy.” The song may have been written back in 1941, but Boyle definitely made the song feel modern and more enjoyable than ever before. The Scottish singer sang the tune November 29, 2013, on the Paul O’Grady Show, four years after her first appearance on Britain’s Got Talent.

On the show, O’Grady gladly introduced his guest singer, Boyle, who he called a “true global singing sensation.” “In four years she shifted more than 20 million albums worldwide. She’s an international star,” he continued.

Boyle appeared on stage wearing a semi-formal, black dress, appearing calm yet passionate behind the microphone. Meanwhile, she had backup singers off to her right and drummers behind her.

Throughout the performance, Boyle’s voice remains intense yet soft and relaxing, making her the perfect candidate to sing a Christmas song on live television.

Just when you thought Boyle was performing a cover quite similar to the original, things begin to change. Later into her performance, a bagpipe player dressed in traditional Scottish attire walks out on stage as a way to pay homage to Boyle’s heritage. A special “Little Drummer Boy” twist!

As the bagpipes play, all singers on stage, including Boyle, sing louder and with more confidence before Boyle eventually gets softer as she belts out the final lyrics.

As the rendition ends, the crowd loudly cheers. After waving with both hands as a way to appreciate the crowd, sassy Susan does a little dance before doing a silly slow-run over to O’Grady for a big hug. She’s got an incredible voice and a big personality, that’s for sure!

And you bet after garnering over 1,200,000 views that many others also enjoyed the performance.

“Ahhh…that wonderful moment when the bagpipes get in!!! Followed by your beautiful voice, Susan! Thank you! Just love this version of this song!” says one person.

Another commenter writes, “OK it was awesome, then the bagpipe comes in and pushed it OVER THE TOP!!!  My new favorite rendition of one of my favorite Christmas songs!”

It’s a performance to remember! Hear Susan Boyle’s incredible rendition down below.