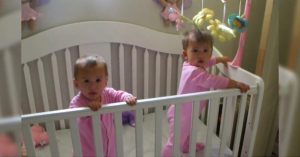 We’ve all heard the idea that twins are in sync. You may have even seen it. Sometimes twins will say the same thing at the same time, or they’ll do something at the same time. Obviously, the idea is that they do these things without knowing, and mainly because they’re connected in ways that normal humans are not.

While twins aren’t always in sync, they do have their moments, and you can’t help but stare in wonder and then laugh at the coincidence. Ever seen this happen? If not, then you’re in for a treat.

A moment like this is shared between twin sisters in the video down below. The twins are babies, only a few months old, and they’re both hanging out in their crib. They’ve got their pink matching onesies, and are clearly ready for stardom. Mom is recording them as they stand around, hitting the side of the crib, smiling, laughing, and playing.

The video is short, only 22 seconds, and at 10 seconds is when you see the sudden change in the babies. They both freeze in place, and then you can watch both of their faces scrunch up. Next thing you know, they both sneeze at the exact same time!

If that doesn’t say that the twins have a deeper connection, then I don’t know what does. Mom, who was lucky enough to get this moment on camera, bursts out in shocked laughter. She clearly can’t believe that her babies just sneezed at the same time.

She tells her daughters, “You guys sneezed at the same time” while giggling at the adorable moment. The twins look at their mom with blank faces after their sneeze, and it’s really funny. You can see that even they’re shocked as they have no words for what happened. Okay, well maybe that’s because they can’t talk, but you know what I’m saying!

We’re glad that mom decided to share this video with the world so that we’d get to witness this rare moment together! The girls are obviously on the same wavelength.

Under the video, one comment read, “Twin power,” and that’s exactly what we’d use to describe this video. It’s two sisters tapping into their twin power to create a rare moment that would end up going viral.

We’re only hoping that this means that the sisters share a great bond as they grow older. I’m sure they’ll be laughing at this video together in some years!