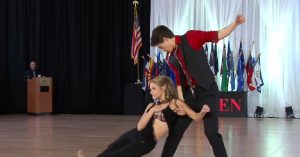 I don’t know about you, but I kind of have two left feet. I mean, I’ve been in ballet as a child. I can dance alright if I want to, like if I really try. However, I definitely don’t have what it takes to appear on Dancing with the Stars. One good reason is because, well, I don’t exactly have smooth moves, let alone, trust that the force of gravity won’t take me down with it.

But trust me when I say there are two particular teens that do have smooth moves. Their names are Ryan Boz from Raleigh, North Carolina and Alexis Garrish from Damascus, Maryland.

Both have been dancing since the age of five, and each has earned numerous awards. Then in 2015, they joined the Young Adult Division of the US Open Swing Dance Championships held in Burbank, CA. The two swing danced to “Shut Up and Dance” by WALK THE MOON, and their long-term experience definitely shows!

The millisecond the music started to play, the duo got off to a strong start with several confident twirls from Alexis. After those beautiful twirls, the couple really got down on the dance floor with incredible footwork, more spins, and dramatic stomps and kicks.

The judges loved the two sophomore high schoolers so much that they named them the first-place winners of the young adult competition. According to the description of a video of their performance, “This is the highest West Coast Swing Honor that can be achieved.”

Although both of the dancers have amazing talent, their backgrounds differ quite some.

Garrish has experience in ballet, tap, jazz, hip hop, and swing. She won world championships in numerous dance categories including waltz, cha-cha, nightclub, polka, and East & West Coast swing, and much more. She’s also on the Varsity Pom Squad and coaches for the Pony Poms Squad.

As for Boz, he specializes in shag, West Coast swing, and hip hop. He earned third place at the Cabaret Division at the U.S. Open and is also a professional actor. In addition, Boz teaches kids about partner and hip hop dancing in his spare time.

Regardless of their differences, Boz and Garrish make a great dance partnership. Their versatile dance experience and smooth steps make them the perfect candidates for any competition. And the two have only been dancing with another for about a year at the time they competed together. Wow!

You’ll be stunned when you see Garrish and Boz dance down below. They clearly earned that first-place prize.