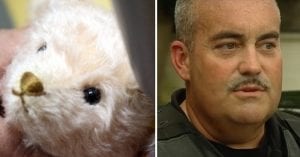 Growing up, you might recall your parent(s) teaching you how to be thankful for your food. They might have reminded you that children in third-world countries are starving. For you to have food on the dinner table growing up meant that you were very fortunate.

A 7-year-old boy in Franklin, Ohio, however, was not as fortunate as many of us during childhood. In fact, one day, he was spotted by Police Officer Steve Dunham standing outside a local CVS store trying to sell his old teddy bear to people walking into the store in exchange for money for food. Immediately, the scene broke the officer’s heart, and he knew he had to step in.

After engaging in a conversation with the child, Officer Dunham learned that he hadn’t eaten in several days. In response, the officer bought a large Subway sandwich for the boy. Seeing how quickly he ate the sandwich, he knew that he wasn’t lying when he said a week had past since he last ate.

As any good officer would do, Officer Dunham then asked the boy for his home address to see what his living situation was like. After all, for a boy of just 7-years-old to be alone on the streets trying to meet his own basic needs seemed suspicious. Why were his parents letting him go hungry, let alone, wander the city by himself?

When Officer Dunham’s colleagues entered the boy’s home, they were stunned at what they saw. Four other starving children were residing in the home, which was saturated with cat urine, infested with cockroaches, and completely trashed. In the refrigerator, which we’d presume would be filled with fresh milk and hearty lunch meats and cheeses, instead housed rotting food.

At the time the police officers were inspecting the home, the parents, Michael and Tammi Bethel, were also present. Tammi denied that there was any level of negligence involved in her and her partner’s parenting when the officers confronted her regarding the matter.

The mother even posted a lengthy post on Facebook defending the officers’ allegations and claiming that the officers merely walked into their home on the wrong day.

“I wonder how many of y’all would let your 17-year-old and 15-year-old, 13-year-old, 11-year-old and almost 8-year-old dirty your house like this? And then not want to help clean it up? Not to mention I had like 20 kids at my house for a few days. Or the fact that I’ve had an open case with child protective services for the last year and they’ve made random visits. My 17-year-old son is on probation. His probation officer has made random visits and I can also post pictures that I randomly took from January to August and it shows my house clean.”

Tammi continues, “The cop just popped in on the wrong day. I haven’t had a chance to clean the mess that all them kids had made and yes I was arguing with my kids to help clean the mess up. BTW my kids didn’t even eat the food that the cops brought them because they had just eaten. And officer Myers also promised me that none of this would go public right in front of children services worker named Roy. So they will be looking at a lawsuit.”

The mother also points out that because CVS is close to her house, the fact that her 7-year-old was begging was food at that location was no big deal:

“Another BTW I could throw a rock from my house and hit CVS where my son was at. He goes down there all the time with his brothers.”

However, based on the conditions of the home and children, both Tammi and Michael were arrested and charged with child endangerment. The couple spent six months in jail, and all five children were taken in by other relatives.

But this wasn’t the first time that the kids were taken from the Bethels. In the last decade, they had been taken away a total of seven times.

Regardless of the reason(s) the Bethels’ were unable to provide their children a safe, clean home environment and wholesome food to eat, no child deserves to live in such conditions.

Officer Dunham just happened to be at the right place at the right time! The Bethels certainly weren’t happy with the outcome, but many others are thankful the officers involved did what they did.

“They treated him like their own kids. And that’s exactly what law enforcement does in situations like this. It’s how we would want someone to treat our kids,” Chief Russ Whitman states in response.

Listen to Officer Steve Dunham’s interview in the video below.