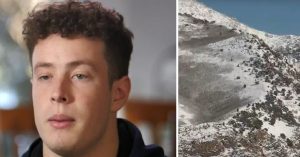 So when Stacy-Alcantara was visiting Utah to win back the heart of his ex-girlfriend on January 8, he decided to go on a hike alone in the mountains during fairly mild weather. The teen hiker planned on arriving back to his ex’s parent’s home just in time for dinner. But little did he know he would be trapped in the snowy mountains for 30 hours, risking his life in the process.

Initially, the eager hiker took an Uber to a canyon east of Salt Lake City where he’d be hiking. With him, he brought six peanut butter and jelly sandwiches and 40 ounces of water to keep nourished while on his day-long hike from Millcreek Canyon to Park City.

Six miles into his hike during the late afternoon, Stacy-Alcantara found himself in very cold, snowy, windy weather. The 17-year-old saw the weather as a sign that he should stop.

With freezing feet and no cellphone service to call for help, the first thing the hiker decided to do to keep himself safe was to build a tiny cave out of snow underneath a tree. Stacy-Alcantara set alarms on his phone for every 30 minutes, so he wouldn’t fall asleep. He also would tap his hands against his chest to promote the continuation of blood circulation.

Meanwhile, his ex and her mother listened to their gut instinct and called the police, seeing that it was getting dark outside with Stacy-Alcantara nowhere in sight.

Hours later, Stacy-Alcantara began to lose hope. Opening up his backpack, he found a small bracelet his ex-girlfriend had given him towards the beginning of their relationship. Looking at and holding the bracelet gave him the mental strength to pull through the dire situation he was in. It helped keep him calm and reminded him that there are people out there who love and care about him.

Then the next morning when the sun came up, Stacy-Alcantara, with wet clothing and boots whose laces were too frozen to tie, left his makeshift shelter. Luckily, he spotted other hikers nearby who had a satellite phone, so he could call to get the help he needed.

Once rescuers arrived at the scene, the hiker was flown by helicopter to the University of Utah Hospital. Immediately, he was treated for frostbite. Although he experienced pain and numbness, the 17-year-old luckily did not have to have his feet amputated.

According to search and rescue officials, deep tracks that were found along the trial indicated that Stacy-Alcantara was traveling through waist-deep snow. Due to the rough conditions he was in, they also state that he was fortunate enough to have survived. “I’m very lucky. I shouldn’t even be alive right now,” he said.

After being released from the hospital, Stacy-Alcantara said he’s looking forward to finishing his senior year of high school and studying aerospace engineering in college. Without hiking knowledge and the survival tactics he used, the 17-year-old may not have been here today.

Some fundamental tips for solo hikers? Dress appropriately, let someone know about your hiking plans (i.e., how long you’ll be gone, your route, etc.), make sure you’re familiar with trail markers beforehand, bring food and water with you, and stay on the trail.

Watch the video below to hear more about Nicolas’s incredible survival story.