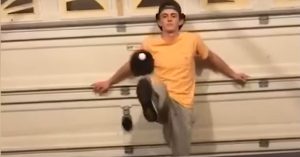 If you have a Tik Tok account or at least a Youtube channel, you know that people can post some crazy-cool videos. Over-the-top pregnancy reveals, triple backflips into a swimming pool, and people sticking their entire fist in their mouth are just some of the many things we might have watched online. The more entertaining, unique, shocking, risky, and wild the video, the more viral it tends to become.

One of the most recent videos to have gone viral on the Internet lately was an insane ping pong challenge conducted by three teens. After posting the video on Tik Tok this month, the trio earned over 90,000 views in less than a week!

In the video, the teens were hitting a ping pong ball back and forth with random objects. Some of those objects included a shovel, a soda can, and a stuffed garbage bag.

Further into the video, the boys’ methods got even crazier and more entertaining. From picking up a person to hit the ping pong ball to using a car to hit the ball, the triad surely got creative!

So, who are the masterminds behind the video? Colin Tiller, Brien Conroy, and Reid Hudson from Apex, North Carolina.

Although the boys come from a small town, there’s no doubt that the video blew up quickly on the Internet.

“About like a week ago, it went viral pretty fast, and then, I’d say about a few days ago, that’s when ESPN DM’d me, and House of Highlights DM’d me and some other major platforms,” Conroy said. “Can’t even go on Instagram anymore. It’s crazy.”

But Conroy admits that when he first saw ESPN’s direct message (DM) in his inbox on Instagram, it took him a while to register it.

Conroy joked that he always thought he’d be contacted by ESPN for football but that “ping pong’s cool too.”

Since the video went viral, Conroy said that he received probably a few thousand follower requests. With everything still being so new to him, the gone-viral web star says he wants to really think things over before he decides to accept their requests. Understood – it’s a lot to garner so much attention is such a short period of time!

Check out the video below to see the boys’ ping pong challenge in action.