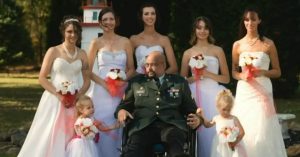 While it’s an older tradition that some women choose not to include in their wedding, most women today still have their fathers walk them down the aisle on their big day. And for fathers, this tradition makes them feel honored as they get to “give away” their daughter as she enters a new household with a new man in the next chapter of her life. Unfortunately, not all women are lucky enough to be able to have their father walk them down the aisle.

While he had always wanted to walk all seven of his daughters down the aisle, U.S. Army veteran, William “Willie” Shelton, was given just weeks to live after having been diagnosed with brain cancer. Prior to his Glioblastoma Multiforme (GBM) Grade 4 diagnosis in 2017, Shelton was experiencing severe, recurring headaches. Even after surgery, his malignant tumors quickly returned. Being that some of his daughters were still well under the age of 18 and single, Shelton was sure that he wouldn’t be alive to give them away on their wedding days.

Luckily, Shelton had a very supportive family who were more than willing to help fulfill his dying wish.

Out of his seven daughters, only one had been married: Emily Flinn. She got married at a courthouse which didn’t provide the opportunity for her father to walk her down the aisle. Shelton’s wife, Cheryl, had a plan: they would have their daughter Emily and her husband renew their vows in their backyard to allow him the honor of giving her away.

It wasn’t just Emily that showed up in a white, fluffy gown. Thanks to the help from LifeCare Hospice, a local salon, David’s Bridal, Ohio-based Taylor Elchert Photography, and other local businesses, the family was able to turn their six other daughters into beautiful brides as well.

“We had this idea and we put it together in three days. We got all the wedding gowns for the girls and the hospice helped us out a great deal with some of the planning,” Cheryl said to Fox 8 News Cleveland. While three days is a strict timeline, the family made it work.

The best part was that the father had no idea he’d be walking not just one but all seven of his daughters down the aisle!

“He looked a little confused, and then it was just great to see everybody,” Emily said as her father, who was sitting in a wheelchair dressed in his uniform, realized what was happening.

So, one by one, the father walked Brides Emily Flinn, Candice Talbot, Jennifer Talbot, Liberty “Gracie” Shelton, Samantha “Sami” Shelton, Cortney Shelton, and Lindsey Shelton down the aisle, even getting out of his wheelchair with assistance to do so.

Not only was the big day special for the father but also for each of his daughters. This would be a moment they’d always cherish.

“I always assumed that my dad would be there to walk me down the aisle and when the possibility was there that he wasn’t going to be able to — this was everything,” Lindsey said.

Unfortunately, the terminally ill father died at the age of 44 just two weeks after the special ceremony. While no family wants to see their loved one go, they had no regrets giving the veteran a great last few weeks of his life.

“This was very touching for him and it was a dream that we could fulfill to the best or the closest we could possibly do,” said wife Cheryl.

While his six unmarried daughters wouldn’t have their father physically present on their actual wedding days, they not only got walked down the aisle before his passing, but they would each get to wear a locket containing a photo of their father with an engraving that reads “a father’s love never ends” to make it feel like he’s truly there.

Watch below as Cheryl says a few words.