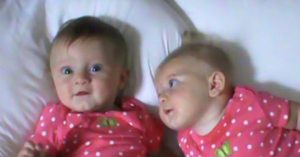 According to BabyCenter, three out of every 100 births in the United States will be twins.  In the last 20 to 30 years, women have been waiting until later in their lives to have children, which has contributed to a steep rise in multiple births. As a woman gets older, she’s subject to more hormonal changes and is more likely to release more than one egg. This fact results in multiple fertilized eggs, and twins. Another factor is the increased use of fertility drugs and fertility treatments that produce numerous births like twins and triplets.

Growing up with a sibling is a unique experience, but having a twin is something else, altogether. There is a long history of stories that involve the “twin connection” that is only felt by two people who share the same DNA. It’s a supernatural connection where twins have a special ability to communicate with one another, often without speaking and sometimes over long distances. Twins even report feeling their twins’ pain, emotional or physical, when that twin is thousands of miles away.

It’s hard to know if these connections and feelings are real, but most twins report at least some kind of special connection with their sibling.

The twins in this video are just babies, but they already share a strong connection. When one of the tiny little girls reacts to something in the room, the other one can’t help but join in. When the two are placed in the bed together, the twin on the right watches her sister carefully. When their mom does something to make twin #1 laugh, twin #2 starts cracking up too, just from watching her sister’s reaction.

If you think that one laughing baby is adorable, then you’re going to love watching these twins. Laughter is infectious, and these little girls are two times the fun!

Click on the link below to tune into their cute fits of laughter!