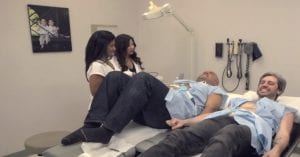 Mothers go through a lot of heartbreak, challenges, and tribulations throughout motherhood, coupled with, of course, great memories, heartfelt moments, and numerous accomplishments. However, even long after their little ones grow into adults and leave the nest, women still go through the latter as being a mother is a lifelong title and job. The work is never done.

Apart from our mothers’ ability to stay strong and brave as they raise us from infants to adults, we can also thank them for the sacrifices they made to hold us in their bodies for nine months, go through intense labor pain to give birth to us, and alter their bodies in the aftermath. Although, many women do not understand what their mothers went through from pregnancy through birth and beyond until they have children of their own one day.

For those who will not or cannot have children, the curiosity is still there: “Is labor really as painful as mothers say it is?” Fortunately, those who are curious can experience the pain of birth via stimulated labor pain technology. Two fathers underwent the latter at their local doctor’s office to prove to women that they can handle labor pain too! Thankfully for us, there’s footage showcasing their hilarious reactions to the reality of labor.

At the beginning of the video, we witness the two fathers getting electrodes hooked up to their abdominal muscles. “You’re basically going to electrocute us for an hour?” asks one of the fathers. “Yes,” replies a doctor.

As the men are preparing for the stimulated labor pain, their wives casually walk into the room with cups of coffee ready to enjoy their hubbies’ entertaining reactions. Oh boy, this is going to be good!

Sure enough, it’s go time! The instant the doctors give the men a couple of contractions, they’re gritting their teeth in pain. However, they still appear calm and collected. Just you wait, boys!

As the doctors kick the pain up a notch to mimic early labor pains, the fathers begin practicing labor breathing as they cringe in pain. “Look at me,” says one of the men’s wives. “Don’t talk to me right now!” They’re starting to look, act, and speak like actual mothers during early labor!

Then here comes the best part: the doctors increase the pain even more to mimic the active stage of labor. The men begin moaning and groaning, screaming, flailing their legs around, and rolling in agony to attempt to conquer the pain. At this point, I almost forgot that they aren’t actually about to give birth!

At the end of the stimulation, both men admit that the pain was a lot worse than they expected. I’m sure they’ll take back what they said at the beginning of the video about women “exaggerating” how awful the pain of labor is!

“Mom, if anything that I just experienced was anything close to what I did to you all those years ago, I’m sorry. You’re like a superhero. You’re one tough momma. Happy Mother’s Day!” one of the men says at the closing of the video.

Watch the video below for a good laugh!