When we hear the word “twins,” we often think of two individuals who look quite similar in appearance. They might have a similar or the same height, weight, hair color, eye color, facial features, voice, and skin tone. Although even identical twins can have their fair share of physical differences, twins in general still share a handful of traits.

So, when 5-year-old Myles, a kindergartner in Foley, Alabama, informed his mother, Britney Tankersley, that he was going to dress up with his friend Tanner for Twin Day during Red Ribbon Week at School, she was left with the impression that the boys had similar physical features. After all, Myles told her that they both had brown hair and brown eyes and, not to mention, they were about the same size.

But appearances didn’t matter; Britney was too concerned with the fact that Myles told her last-minute about the dress-up day! While her son should have already been asleep in bed, he was just now informing her about it.

And there was an even bigger problem at hand: Britney had no idea what size clothing Tanner wore, what type of clothing he liked, or even how to contact his parents to make sure it was okay for her and Tanner to dress up together.

“My daughter already had a twin. We had it planned for a few weeks, but Myles is in Kindergarten, so I didn’t know any parents to connect with in his class,” said Britney.

Fortunately, Mom was able to make Twin Day happen for her sweet kindergartener and his buddy.

“I texted the teacher, who gave me Tanner’s mother’s name but didn’t have access to her phone number at the time. So, I started Facebook messaging & texting everyone in our little town to see if they knew her. Her FB was deactivated at the time. I finally got her number about 8:30 PM and asked if she was OK with the boys being twins the next day. She didn’t mind. So, I got his size and headed to Walmart to get matching outfits.”

At 9 p.m. that night, the mother of three quickly snatched up two matching shirts from their local Walmart that that would fit both boys: plaid button-ups with the text “Future Leader” above the pocket. Myles put his buddy’s outfit in his backpack and took it with him the next day to school for him to put on.

Since Britney couldn’t be there to see Myles and Tanner twinning, she asked if the teacher could take a picture and send it to her, which she did. Seeing what Tanner looked liked left Myles’s mother in shock and in tears!

“Obviously very two different children, but Myles didn’t see that. Wouldn’t the world be such a better place if we could all view it through the eyes of a couple of 5-year-olds?” Mom said in a Facebook post.

Although a difference in skin color truly doesn’t matter, I remember when we’d have Twin Day in middle school and high school, some people had the assumption that you had to have similar features to your prospective “twin” in order to participate in the dress-up day.

The fact that Myles, a 5-year-old boy, didn’t come to such a small-minded conclusion is very mature of him. Others on the Internet also agree and applaud Myles for having rare intentions!

“This goes to show once again that racism and prejudice is learned. No one is born hating anyone else. Parents, please stop putting hate in your children’s minds. You are corrupting them. We all share this world and need to LOVE one another,” says one commenter.

“The fact that the photo went viral is still pretty mind-boggling,” explains Britney. “It practically happened overnight. I’m glad it did because the message we’re trying to send is something the world needs to hear.”

Come to later find out, Myles and Tanner’s families live in close proximity, giving the two families plenty of opportunities to visit with one another!

See Myles and Tanner’s Twin Day attire below. They are the cutest! 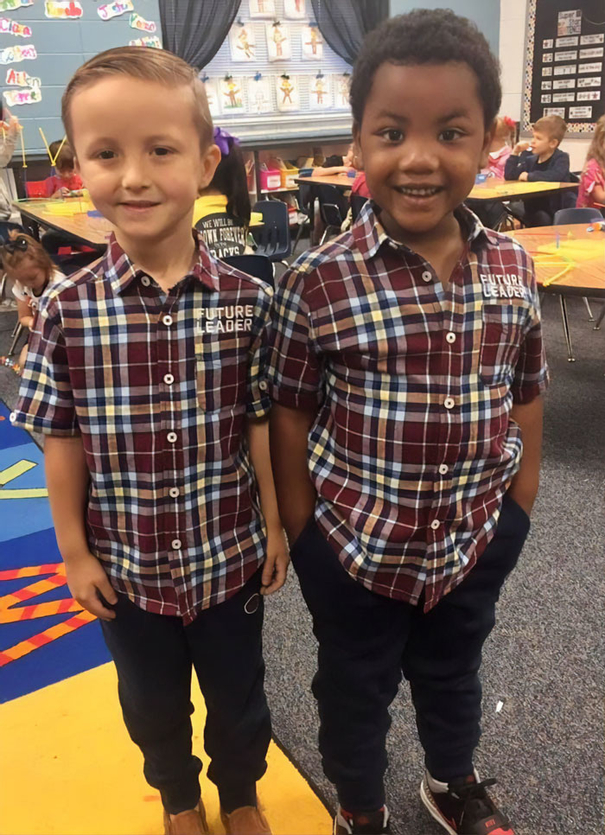