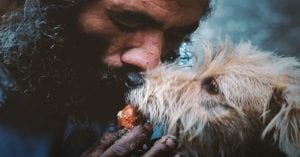 Initially, when we go to adopt a pet, our main intention is to save an animal in need. By providing them a loving, caring, nurturing environment, we feel good inside knowing we’re making the life of an animal safer, easier, and more fulfilling.

However, what’s interesting is that the pet we adopt ends up saving us too – in ways we never imagined. Over the years, we realize that our beloved pet doesn’t just sleep, eat, and breathe in our home. They also provide comfort, joy, and company when we need it the most.

Like a traditional animal shelter, Glenn and David’s version would open their doors to stray animals and care for them until they’d eventually get adopted. What makes their model so different, however, is that they only staff homeless individuals to work in their shelter.

The whole point of merging homeless animals and homeless people together is to help enrich both of their lives at the same time.

“At first glance, this situation can seem grim and depressing: Many assume that animals who live on the street with homeless companions are mistreated or deprived,” Glenn quotes for an article for The Dodo.

In fact, both Glenn and David have seen the positive interactions between the two, considering them the perfect match for one another.

“The compassion, empathy, and self-sacrifice defining the relationship between those who are homeless and their pets are extraordinary. It is difficult to explain how affecting it is to watch a hungry, homeless person receive a desperately needed meal and, without a second thought, instantly divide it in half to share it with their hungry dog or cat.”

The latter reason is exactly what motivated the two men to create their unique project.

Apart from that, the men’s love for dogs also helped fuel their mission. Glenn and David have picked up canines off the street, fostered them, adopted them out, and even helped fight for animal rights. But nothing the two have done was as fulfilling as creating their special animal shelter model.
“The goal is to simultaneously empower and improve the lives of as many homeless people and homeless animals as possible. We hope — and genuinely believe — that the success of this project can serve as a model, a template, for inspiring similar shelters in other cities around the world.” In fact, their shelter, which is currently headed by Francisco David, has already proved itself to be successful.

The first employee of the shelter, 20-year-old Lucus of Ipanema, was able to afford his own apartment thanks to his employment. Additionally, he has had the opportunity to provide love and care for endangered canines on the street, all while he’s gaining job experience, skills, and a sense of accomplishment.

With the addition of volunteer veterinarians and nurses, Glenn and David’s shelter will be better able to care for homeless animals. Likewise, to further help their employees, the shelter has partnered with a Rio-based agency, CREAS, which will “provide temporary housing, clothing and counseling services to all homeless people hired at the shelter.”

To continue to grow and expand, the shelter will require funding from the public. This is especially true since Rio no longer has an office that would help financially support the animal population of the city.

Even if you aren’t able to donate, please watch the video below. Share it with your family and friends to spread the word!