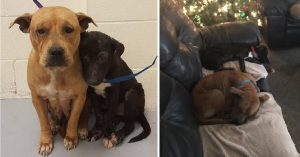 Just like us, animals don’t tend to enjoy change. Switch out their dry food for another brand, they’ll often pick at their food. Forget to take your canine out on their nightly walk, and they’ll whimper while holding their leash in their mouth to remind you. Although our pets don’t always live their lives based on routine, when the things they’re used to change or stop, they freak out a little.

So when two pit bulls were randomly dropped off at Montgomery County Animal Shelter in Conroe, Texas by their owner, they began to worry. The two bullies were so anxious about what was happening that they huddled closely together the entire time on their way to the shelter. However, the brother and sister had no idea that the “scary” car ride to their unknown destination would actually change their lives for the better.

Upon arriving at the shelter, the dogs, who are now named Bridget and Louie, had matted fur and a nasty case of mange, indicating that their owner had neglected them. Due to the strong attachment the two pups had to one another, their frightened and sad facial expressions are clues that they were also abused.

In fact, the black pit bull, Louie, had a sharp barbed wire collar wrapped around his neck. As for Bridget, her teeth were corroded down to her gum tissue. There are one of two explanations for this. Either Bridget damaged her teeth from consistently gnawing on a hard substance like metal (e.g., chain, barbed wire), or her owner intentionally filed her teeth to either use her as a bait dog or avoid male dog injuries during breeding. One thing is for sure: it’s not natural for a dog to have filed-down teeth. To top it off, Bridget also had a case of heartworm.

Not long after entering the Montgomery County Animal Shelter, where the two shared the same kennel, they were removed by Texas Animal Society and on their way to a foster home. Although it’d take them a while to trust their new foster mom and dad, let alone get used to their new environment, both bullies found comfort that they never had. Their new favorite activity? Snoozing on the couch together!

“When we got to our new human’s house, we learned what a couch was! And Bridget fell in love. She hasn’t left this couch yet! She was finally content and could sleep,” says one foster parent.

Apart from sleeping on the cozy couch, the two pit bulls also enjoyed hanging out on the front porch and letting the sunshine warm their fur. The best friends could also frequently be seen playing with one another.

According to the foster parents, since moving into their temporary home, Bridget is all smiles and constantly wags her tail while Louie has turned into a “social butterfly” and enjoys curling up with his foster dad on the sofa. The two canines are also much healthier, especially Bridget who is cured of heartworm.

And thanks to Texas Animal Society, both canines now have permanent homes. Additionally, Bridget has been sent to Canine Good Citizen training!

It’s so good to hear that the two dogs are now happy. Meet Bridget and Louie below!