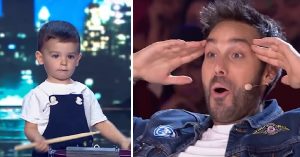 There’s something special about drummers. These musically inclined individuals are masters at persistence, timekeeping, and active listening. So, it’s no surprise that many people drop their jaws when they listen to someone with great drumming skills.

While there are many talented drummers of all ages, the judges on Spain’s Got Talent weren’t too sure that a two-year-old named Hugo Molina would be old enough to have decent drumming skills at his ripe young age. After all, professional drumming isn’t a common developmental skill any toddler should have. Not to mention, the kid was much too little to walk himself onto the Got Talent stage with his drumming set without help from his dad, Manuel Jesús.

But the little drummer, while he might have been completely oblivious to what was going on, proves the judges wrong once his father announces, “How do we play the drums, Hugo?”

With neatly-groomed hair and adorable overalls, the toddler immediately begins to play a traditional Semana Santa (Easter) parade march on his tiny drum. Almost as quickly as Hugo begins playing, jaws drop from both the judges’ table as well as out in the audience.

Little did everyone know, the baby drummer was just getting started! The kid eventually picks up the pace and adds a wooden block to his musical audition for added flair. As the performance picks up, everyone listening becomes more stunned. At this point, one of the male judges practically has to hold onto his chair to prevent himself from slipping to the ground in complete awe!

Wow, this kid will be joining a band or percussion ensemble in no time! He puts some professional drummers to shame.

According to a translated version of Judge Risto Mejide, “He kept the rhythm the whole time and that just shows his talent is innate. You’re either born to do this or you’re not.”

Not only is Hugo amazing at drumming at such a young age, but he’s also a great speaker and doesn’t seem phased by crowds in the slightest. It’s amazing how he seems so calm and collected the entire time, making drumming look like such an easy and effortless task. Meanwhile, it’s his mom who’s silently freaking out backstage!

Check out Hugo’s audition below, which has earned millions of views since September of 2019. That kid’s two decades younger than me and has better rhythm than I’ve ever had! That’s natural talent for you.