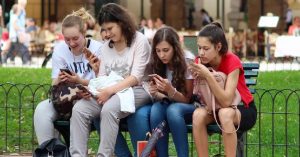 Cell phones: They’re life-changing devices. At the palm of our hands, we have the ability to not only contact loved ones but have immediate access to music, maps, games, and even the Internet. But with the good comes the bad. These very same pocket-sized devices can act as a tool to cheat while taking exams, cause users to become distracted while driving or walking, and make users feel more inclined to engage in bullying.

From sharing negativity online to cyberstalking, it’s clear to see how the use of cellphones can potentially be harmful if misused.

But let’s get real for a second. Don’t we rely on our phones for, uh, well pretty much everything? It’s also how parents keep tabs on their kids, checking up to see where they are, or keeping the lines of communication open in case of emergency. Or what about being social? Imagine how much your social life would nosedive if no one could get ahold of you.

There are definitely two sides to the coin here, and based on the disadvantages of youth being in possession of a phone, there’s some serious talk of a proposed bill banning anyone under the age of 21 from having one!  In Vermont, USA, they are proposing bill S.212 which would not only strip away the privilege of anyone under the age of 21 from owning a phone but even using a device would be made illegal.  If passed, those 20 and younger could face up to one year in prison and/or a $1,000 fine if they violate the cell phone ban.

So why such potentially drastic measures? The main reason this bill was introduced was because using cell phones while driving is one of the leading causes of death. In addition, the bill links greater cell phone use among teens and children to higher bullying and rates of depression. Generally, the legislature concluded that those 21 and younger are “not mature enough” to therefore, they also don’t have the maturity to use cell phones.

The controversy is huge.

According to Michelle Fay, the executive director of Voices for Vermont’s Children, those 20 and younger will still have access to computers, among other similar technological devices, so banning cell phones wouldn’t make much sense. Not to mention, she brings up the importance of cell phones for the younger generation, specifically with getting in contact with their parents.

In a final point, Fay denies the claim that banning cell phones would help prevent deadly collisions due to texting and driving among adolescents. “For teenagers, people in their car is a bigger distraction than cellphones,” she said. Not to mention, there’s already a law against texting while operating a vehicle.

Although there’s a lot of criticism, there are still supporters of the bill.

“Given that texting and driving kill so many kids, I was wondering when a politician would risk it and propose taking away U21s’ cell phones and licenses. After all, it’s for the children and if it saves just one life…” says someone via a Facebook comment.

“Using cell phones for texting and calling is not a huge problem compared to the misuse/abuse/cyberbullying that takes place when kids have unsupervised access to social media and the world wide web,” another commenter says.

Regardless of where you stand on the issue, watch the video below to learn more about the proposed Vermont bill. What do you think?