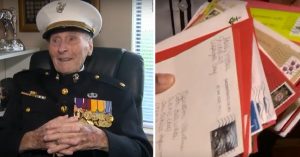 Some people say Valentine’s Day is all about consumerism and that it’s just a way for greeting card companies, candy manufacturers, and the like to make more money. Although it’s true that many businesses do well around this holiday, Valentine’s Day doesn’t require that we spend money on our partner at all. Typing out a lovey-dovey text or spending some quality time with our sweetheart will do just fine. Still, some people don’t acknowledge the holiday at all, and that’s okay. However, I’m a firm believer that everyone deserves a little love on Valentine’s Day.

Like many Americans, the world’s oldest U.S. Marine veteran, 104-year-old William “Major Bill” White, never celebrated Valentine’s Day. Even when his wife of 42 years was still living, the two never gave one another a love letter, card, a bouquet of flowers, or a box of chocolates. Perhaps the two were never the romantic type. Or, maybe they just didn’t see what the hype about the February 14th holiday was all about.

Living as a single man in an assisted living home in Stockholm, California, never in a million years would White think he’d ever get to celebrate Valentine’s Day for the first time. That is, until one of his facility’s residents set up “Operation Valentine” to get at least 100 Valentines sent to White from his loved ones and even strangers.

The campaign was more than a success! White not only received the initial hundred Valentines his fellow resident was hoping for; he received 70,000+ in total!

Love letters and holiday cards came from all 50 states. In addition, he received mail from several foreign countries.

Never having received anything for Valentine’s Day before, let alone thousands of cards in the mail, White was overjoyed and stunned at the same time.

“It’s just too fantastic. It’s something I’ve never heard of or seen. All of a sudden here, like a ton of bricks. I’m sort of speechless,” White responded.

In fact, so much mail was received that White had to have several volunteers help him open his mail and read it to him! Many of the cards and letters contained heartfelt messages thanking Major Bill for his service and giving him best wishes going forward.

Not only can white now say that he’s finally got to celebrate Valentine’s Day, but he’ll never forget the large amount of mail arriving from thoughtful people around the world.

Meet the veteran in the video below.