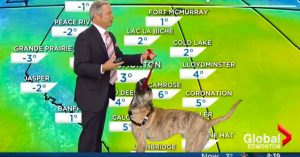 When you’re at a party and don’t know a soul or when you’re making small talk in the line at the grocery store, the most go-to topic, in my humble opinion, is the weather. It affects everyone and everyone has something to say about it. It’s a good way to break the ice, it’s always changing, and everyone can relate! That being said, however, it can sometimes be a little boring. Watching the weather, listening to weather on the radio, people complaining about it all the time, it can run dry pretty fast.

But this particular segment on TV is quite the opposite. This is the best clip to do with the weather I’ve ever seen and it kept me entertained from start to finish. It helps when there’s a funny, mischievous dog involved!

This hilarious segment opens to weatherman Mike Sobel on Global news station in Edmonton, Alberta, Canada. Sort of on a leash, he’s got with him on air a sweet 18-month-old Mastiff mix, Ripple, who was extra eager to play and have fun! Ripple was brought in by the Humane Society to join Mike during his weather segment, and let me tell you that there is no such thing as a dull moment here with Ripple.

Ripple doesn’t care one little bit about the weather report. All of his attention is directed at chewing off his leash. He’s got his mouth clamped down trying to chew through the tough material, and he seems pretty preoccupied gnawing through it. Mike tells him to sit, but Ripple isn’t too concerned. He doesn’t listen and stays focused as he chews away. Immediately, there’s laughter coming from behind the camera.

Mike carries on, able to put on a straight face and do his job while the dog munches away. Ripple is having a blast, and just wants more of his leash because he starts to pull away and get feistier! He’s totally not paying any mind to anyone or anything other than what’s in his mouth, causing a bit of a scene trying to pull Mike away. He’s laughing and awkwardly struggling, saying, “Ok, we gotta move quickly through this here…” and then the leash snaps. Everyone is laughing in disbelief! The pup jumps up to try to nab the other half and it turns into a tug of war. Mike quickly finishes up trying not to laugh harder than he already is. Seriously, this is just too cute! The dog has a mega personality, and apparently, got adopted the next day!

Click below to watch the best weather report ever!