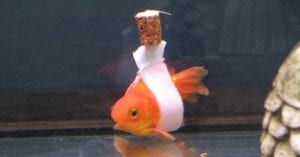 Disabilities and setbacks can occur to anyone, even our animal companions. However, despite such, it doesn’t change the way we love our pets. Even though there may be things that they cannot do or may do differently, it doesn’t degrade their worth in our eyes.

While we love our pets the same no matter what sets them apart from other animals, there may be a different way that we must care for them, whether temporarily or permanently. For instance, if our canine has a sprained foot, we might have to pick him or her up to help them transport from one location to the next, or we might need to provide a special device to help them walk. Accommodating our furry, scaley, or feathery friends proves just how much we love and care about them.

For one pet owner, he noticed that his goldfish was having difficulty swimming. Interestingly, the fish was able to swim left, right, down, forward, and back, but he was not able to swim upright.

Sometimes a fish’s buoyancy is affected due to health conditions like swim bladder disease. When a fish has trouble with buoyancy due to a health ailment, they may have difficulty traveling upright and may even float upside down and/or sink to the bottom of the tank. As one could imagine, the quality of life of a fish with a setback like this would decline greatly.

In response, the goldfish’s owner decided to make a special device that would ensure his pet would be able to swim without difficulty. With a little gauze and a cork, the pet owner created a tiny “wheelchair” for his fish that he then tied around his midriff. The device was a success as his fish was able to swim upright once again!

While we may not always know how to help our pets, it’s beautiful when someone takes the time to learn what it is their pet needs to thrive. Accommodation is all about being empathetic, considerate, and selfless in order to make someone else’s life easier. When it comes to helping others, you know that if you were in the situation of the other person or animal, you would want someone to help too, and that’s exactly what this goldfish owner did!

Although there isn’t video footage of this particular goldfish, another fish by the name of Einstein received a similar device to help him swim when he lost his fin to swim bladder disease. See the heartwarming footage of him swimming in the video below.