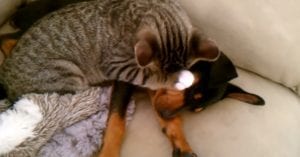 When we were sick as children, whether it be the common cold or a nasty stomach bug, our parents went the extra mile to make sure that we were on the right track to being healthy once again. They might have heated us up a can of comforting chicken noodle soup, gave us a fluffy blanket to lay with, or even let us stay home from school to watch our favorite cartoons while we got plenty of rest during our recovery. Healing from any yucky illness is bittersweet. We love the extra love and attention, but we also hate the feeling of being unwell.

At this point, each and every single one of us has dealt with a variety of bacterial and viral illnesses. They are never fun! That said, whenever others are sick, we may take on a similar role as our parents had when we were sick because we know how much it helps when we have someone by our side to care for us when we aren’t feeling the best.

When one canine called Zeke broke out in hives and was rushed to the vet to get steroids and Benadryl shots, Winston the cat waited patiently at home until he returned to provide him the love and care he deserved. Most cats would be happy the yappy puppy was finally out of the house. However, the unexpected bond between this feline and canine is melting hearts.

Luckily, the owner of the two critters filmed and posted a video of Winston caring for the canine after his appointment. In the clip, we watch as the cat lovingly cleans the sick dog before wrapping his long, furry arms around him prior to dozing off for a kitty-puppy nap on the sofa. Winston sure looks happy to receive the care from his buddy! They will surely be best friends for life.

While a bath, cuddles, and a comfy, restful nap are things we usually want when we are not feeling well, these are not the only things Winston helped provide for his canine companion. According to one commenter on the video, “A cats purr vibrates at a frequency that promotes bone health and aids in healing. So the kitty is probably trying to purr him better.” So smart! Who would have thought?!