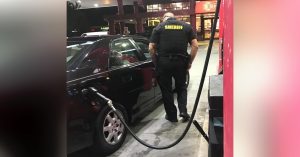 We all need a lending hand at some point in time. Whether it’s lifting a heavy object or finding a certain location, it’s okay to ask for the aid of others. As social creatures, it’s not just about receiving but also giving back. Going out of our way to provide favors for others, even when they don’t ask for help, is one of the most selfless things we could ever do.

Deputy Sheriff Chris Owen did the latter when he spotted a woman with a disability struggling to pump gas at a local gas station. Right away, Deputy Owen offered the woman his help, and she gratefully accepted. However, not only did the woman need help pumping gas, but Owen noticed that she needed help financially too. This became apparent when the woman asked Owen to stop pumping the gas once the meter hit $8.

But the officer didn’t listen to the woman’s simple request.

“I asked if she thought that would be enough to get her home, and she told me where she was going and that she thought it should cover it. I did not want her to run out of gas and be stranded,” Chris Owen said.

The woman, however, became frantic as the officer continued filling her tank until it was completely full; she warned him that she wouldn’t be able to afford it. Owen assured her that it was fine as he’d be paying for her gasoline. Instantly, the lady went from worried to very grateful.

After finding out about Deputy Sheriff Owen’s good deed, the Forsyth County Sheriff’s Office, the police department he has been working at for six years, decided to share the story on Facebook.

“This job isn’t just about carrying a gun and a badge – it’s about serving others,” reads part of the caption on the photo.

Many from near and far were touched by Chris Owen’s kind act.

“This is awesome! With so many negative things about our police officers, rarely do we get to see the positive actions they bring to the community,” said one commenter.

According to another commenter, “Just another example of a policeman helping a needy citizen. Our Policemen and Firemen are made of special cloth! Please let them know how special they are in your life next time you meet one.”

While many responded, calling the officer a hero and a great example of what it means to be a good police officer, Owen mentions that he did it because it was simply the right thing to do. Owen also believes that you should “treat everyone you encounter with respect and understanding” and hopes his viral story spreads that message to others.

We need more people like Deputy Owen, don’t you agree?

Hear what the deputy sheriff has to say!